A Texas man was captured on video rescuing his dog that fell into a frozen pool.

SOUTH PADRE ISLAND, Texas - Volunteers in Texas have rescued about 4,500 cold-stunned sea turtles from frigid waters this week. The endangered turtles are among a number of animal species that have been gravely threatened by record-cold temperatures in the state.

Sea turtles can become "cold-stunned" when water temperatures drop to about 50 degrees Fahrenheit or below, experts say. They become comatose as their heart rate drops, losing their ability to swim or even hold their head above water.

"They are literally stunned. Despite their instincts telling them to raise their necks and breathe, they literally can’t — and they drown in the water," said Wendy Knight, the executive director of Sea Turtle Inc., a nonprofit rescue group in South Padre Island, Texas.

Sea turtles are one of the most iconic animals found in the area. It’s also the only location in Texas where nests from all five of the sea turtle species that live in the Gulf of Mexico have been found — and all of these are listed under the Endangered Species Act as "endangered" or "threatened."

Sea Turtle Inc., with the help of volunteers, raced to save thousands of turtles since the onset of the deadly winter storm sent temperatures plummeting to freezing levels in South Texas. The cold-blooded reptiles were rescued by people along the shoreline and in boats, transported to indoor facilities and stored on tarps in warmer temperatures. One boat captain even took volunteers out and saved more than 100 turtles alone.

But the facility also lost power this week, along with millions of other residents seeking to warm their homes during the unusually frigid temperatures. The demand overwhelmed the state’s power grid and resulted in rolling blackouts across the region.

Fearing that a bad situation could turn into a tragedy, the rescue group put out a call for help to the community. Many offered to help, including SpaceX, which has a launch site and production facility in nearby Boca Chica and has developed an educational relationship with the rescue group. SpaceX donated a large generator to help warm the beleaguered turtles up.

"We have for a while now trained their employees on how to patrol and watch for sea turtles," Knight said. "There is even a cold-stun team of volunteers at SpaceX."

Once the Sea Turtle Inc. campus ran out of room with more than 500 turtles, the local South Padre Island Convention Centre also offered its facility as overflow — now housing roughly 4,000 of the marine animals.

For comparison, the rescue group has protected 1,800 cold-stunned turtles over the past decade. "This one event is 4,500, so it is amazing," Knight added. 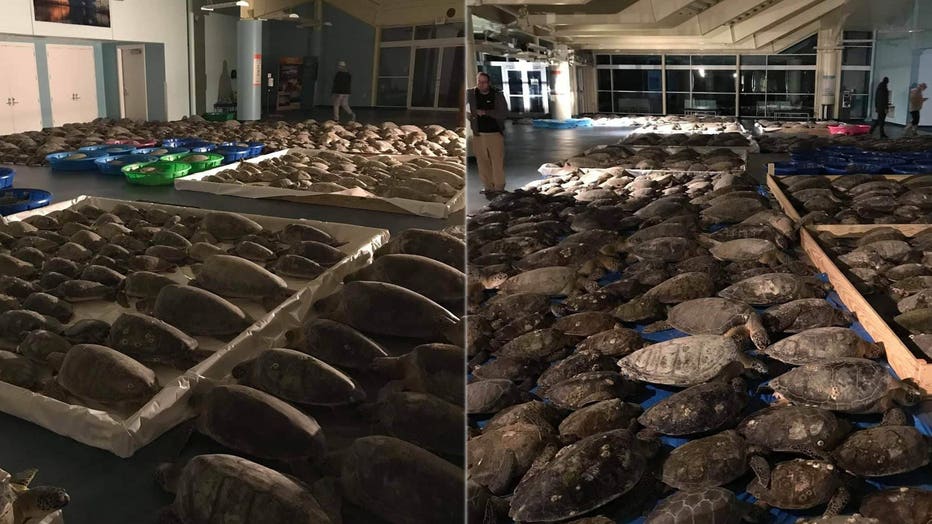 Some of the turtles have begun to move and "wake up" as their bodies warm up, but the staff won’t know for a couple of days how badly the animals have been injured. Some severe cases can lead to pneumonia.

"We’re really going to know what we’re dealing with probably by Friday or Saturday, as far as how many are doing well and will be released, versus how many don’t make it," Knight said.

Sea Turtle Inc., found in 1977, not only works to rescue and rehabilitate injured sea turtles, but also to educate the public and assist with conservation efforts. Prior to the severe winter weather, the nonprofit’s hospital already housed many turtles hurt from boat strikes and litter in the ocean. It also has five resident turtles between 100 to 300 pounds, living in 350,000 gallons of water.

Knight said the much-needed generator from SpaceX "has put a band-aid on a critical wound," noting that the facility still needs additional help from the power grid to maintain its mission.

"Without a doubt, this event coupled with the withholding of the electric and the power, this could have been catastrophic. It could have wiped out a decade or more worth of our work," she added.