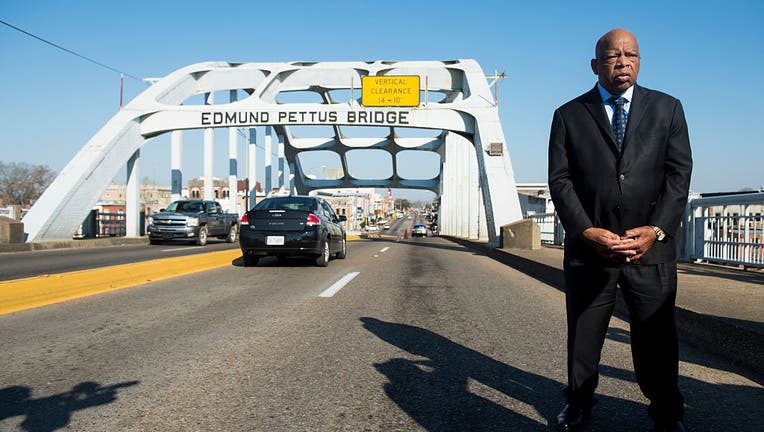 Rep. John Lewis, D-Ga., stands on the Edmund Pettus Bridge in Selma, Ala., in between television interviews on Feb. 14, 2015. Rep. Lewis was beaten by police on the bridge on "Bloody Sunday" on March 7, 1965, during a march for voting rights from Sel

(KTVU and wire reports) -- Congressman John Lewis, a civil rights icon and the last of the Big Six civil rights activists led by the Rev. Martin Luther King Jr., died Friday at age 80. He is being remembered by congressional colleagues, civil rights leaders and former presidents as a "titan" of the struggle against racial discrimination.

"Considering his enormous impact on the history of this country, what always struck those who met John was his gentleness and humility. Born into modest means in the heart of the Jim Crow South, he understood that he was just one of a long line of heroes in the struggle for racial justice. Early on, he embraced the principles of nonviolent resistance and civil disobedience as the means to bring about real change in this country, understanding that such tactics had the power not only to change laws, but to change hearts and minds as well."
------
HOUSE SPEAKER NANCY PELOSI

"John Lewis was a titan of the civil rights movement whose goodness, faith and bravery transformed our nation - from the determination with which he met discrimination at lunch counters and on Freedom Rides, to the courage he showed as a young man facing down violence and death on Edmund Pettus Bridge, to the moral leadership he brought to the Congress for more than 30 years. "
------
SENATE MAJORITY LEADER MITCH McCONNELL

"I will never forget joining hands with John as members of Congress sang We Shall Overcome at a 2008 ceremony honoring his friend Dr. Martin Luther King, Jr. It could not have been more humbling to consider what he had suffered and sacrificed so those words could be sung in that place."
------

"From a small farm in Alabama, to life-risking service in the civil rights movement, to three decades in Congress, he was always `walking with the wind,' steered by a moral compass that told him when to make good trouble and when to heal troubled waters. Always true to his word, his faith, and his principles, John Lewis became the conscience of the nation."
------
THE CONGRESSIONAL BLACK CAUCUS
"The world has lost a legend; the civil rights movement has lost an icon, the City of Atlanta has lost one of its most fearless leaders, and the Congressional Black Caucus has lost our longest serving member. The Congressional Black Caucus is known as the Conscience of the Congress. John Lewis was known as the conscience of our caucus."
------
THE REV. AL SHARPTON
"My friend, role model, and activist extraordinaire has passed. Congressman John Lewis taught us how to be an activist. He changed the world without hate, rancor or arrogance. A rare and great man."
------
BERNICE KING, DAUGHTER OF MARTIN LUTHER KING, JR.
"Farewell, sir. You did, indeed, fight the good fight and get into a lot of good trouble. You served God and humanity well. Thank you. Take your rest."
------
FORMER SENATE MAJORITY LEADER HARRY REID
"Few have had as powerful and inspiring an impact on our country as Congressman Lewis and America is a better, more equal place because of his sacrifice and leadership. Our nation owes so much to this incredible man. We served together in Congress for decades, and I was honored to call him my friend."
------
REP. MAXINE WATERS
"It is not enough to say he was a revered civil rights icon. He was a man of impeccable integrity who dedicated his life to fighting against racism, discrimination & injustice. John was a true leader who inspired us all to have the courage to fight."
------
THE AMERICAN CIVIL LIBERTIES UNION OF GEORGIA
"Time and time again he demonstrated moral and physical courage in nonviolent defiance of the white supremacist regime in the South. Throughout his long life, his commitment to full equality for all people never wavered. He will always be remembered with gratitude and admiration."
------
U.S. SEN. DAVID PERDUE OF GEORGIA
"No one embodied the word `courage' better than John Lewis. As a civil rights icon, John inspired millions of Americans to fight injustice and reject the status quo. Without a doubt, his wisdom and resolve made the world a better place."
------
U.S. SEN. KELLY LOEFFLER OF GEORGIA
"As a leader in the civil rights movement, he always pushed America to live up to its promise of freedom and equality. Our nation is better because of his leadership and courage. We know his legacy will never be forgotten."
------
STACEY ABRAMS, GEORGIA POLITICIAN
"Defender of justice. Champion of right. Our conscience, he was a griot of this modern age, one who saw its hatred but fought ever towards the light. And never once did he begrudge sharing its beauty."

“When you see something that is not right, not just, not fair, you have a moral obligation to do something." Tonight, the world lost a legend. Let us honor his life and memory with action. Rest in power, Rep. John Lewis."

"John Lewis was an icon who fought with every ounce of his being to advance the cause of civil rights for all Americans. I'm devastated for his family, friends, staff—and all those whose lives he touched. My friend, thank you for showing the world what 'Good Trouble' looks like."

"I loved John Lewis. The superlative words that will be used to describe him over the next weeks and months will not do justice to this man. I believe he is the greatest member of Congress to cross the threshhold of the House chamber."

"John Lewis was a hero we didn’t deserve—a champion for equality and freedom, a steadfast statesman, and one of my personal heroes—and I’m heartbroken at his passing. He lived a remarkable life and inspired a generation of Americans to fight for a better tomorrow."