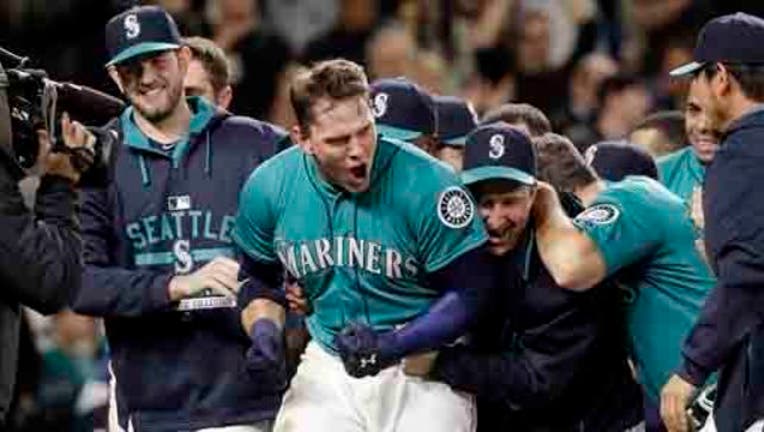 SEATTLE (AP) — Logan Morrison homered on the first pitch of the 11th inning from Oakland reliever Dan Otero, and the Seattle Mariners rallied to beat the Athletics 4-3 on Friday night.

Otero (2-2) had just finished his warmup pitches and left a 91 mph pitch over the middle of the plate to open the inning. Morrison didn't miss, hitting his fifth homer of the season deep into the seats in right-center field. It was Seattle's first game-ending homer since Kyle Seager in April 2014 against Houston.

Seattle rallied from a 3-1 deficit, scoring twice with two outs in the seventh inning on consecutive RBI doubles from Brad Miller and Robinson Cano to draw even.

The Mariners also got a stellar effort from their bullpen that had struggled of late. Carson Smith (1-1) allowed just one baserunner pitching the 10th and 11th innings as Seattle relievers allowed one hit in six scoreless innings of relief.

Josh Reddick hit a two-run homer for Oakland in the fifth inning, but Oakland managed just three baserunners the rest of the way — one hit batter, one walk and one reaching on an error. Reddick's homer was his fifth of the season and gave the A's a 3-1 lead. Billy Butler also had a two-out RBI single in the third inning.

Seattle pulled even in the seventh scoring twice with two outs. Miller's RBI double off Evan Scribner scored Dustin Ackley to get to 3-2 and Cano followed with his first career hit in seven at-bats against Fernando Abad, pulling a double just fair down the right field line to score Miller.

Oakland missed a chance to take the lead in the eighth. Pinch-hitter Billy Burns opened the inning getting hit on the foot by a Charlie Furbush breaking ball. He advanced to second on a wild pitch and reached third with one out after Reddick's deep fly out. Furbush intentionally walked Billy Butler and struck out Stephen Vogt looking for the second out. Mark Lowe replaced Furbush and got pinch-hitter Mark Canha to ground into a force out and strand Burns at third.

Both Gray and Seattle starter Taijuan Walker struggled with pitch count. Walker lasted five innings before Seattle went to its bullpen, while Gray matched his shortest outing of the season.

Athletics: LHP Sean Doolittle (left shoulder strain) threw to hitters during pregame on Friday for the first time since being shut down during spring training. ... Ben Zobrist (knee) will begin taking batting practice when the A's return home next week.

Mariners: RHP Tom Wilhelmsen was activated from the 15-day DL (hyperextended elbow) without needing a rehab assignment. Seattle manager Lloyd McClendon said Wilhelmsen threw so well in his simulated game earlier this week he didn't need the rehab outing in the minors.

Athletics: RHP Jesse Hahn (1-2) looks to regain his form from earlier in the season. Hahn is 0-1 with an 8.10 ERA in his last two outings since missing a start with a blister on his pitching hand.

Mariners: LHP J.A. Happ (2-1) has been Seattle's most consistent starter not named Felix Hernandez. But Happ struggled in his last start against Houston giving up six earned runs.