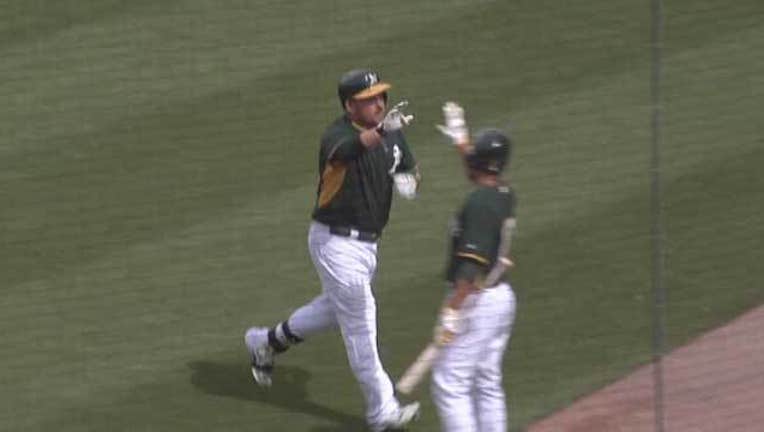 MESA, Ariz. (AP) — Brandon Moss had a home run and a triple against his former team, but the Cleveland Indians lost to the Oakland Athletics 3-2 Wednesday.

Moss, acquired by the Indians in an offseason trade, tripled off A's starter Kendall Graveman in the second inning but was stranded at third. He connected with one out in the fourth off Fernando Abad to cut Oakland's lead to 3-2. It was his second homer of the spring.

"I tried to distract him, but he wouldn't turn around and look at me," A's manager Bob Melvin said of Moss, his former designated hitter.

The A's scored three runs in the second.

Free-agent signee Billy Butler led off the inning with his second homer. Stephen Vogt reached second base on an outfield error and Marcus Semien walked. Billy Burns had an RBI single and Craig Gentry hit a sacrifice fly.

Athletics: Graveman picked up his second win of the spring. Melvin was pleased with his three-inning effort — one run on two hits with a strikeout and a walk.

Indians: Team medical officials are trying to figure out how best to handle Gavin Floyd. The RHP re-injured his elbow (stress fracture). ... INF-OF Nick Swisher is making his way back from knee surgery and is expected to resume game action within a few weeks. ... RHP Josh Tomlin, a late scratch from Sunday's game due to right shoulder fatigue, was expected to throw a side session on Wednesday.

Athletics: RF Josh Reddick (strained oblique muscle) continues to work his way back but still is looking at a minimum of 10 days before resuming baseball activity. ... LF Coco Crisp will be sidelined for at least a few more days with a strained right triceps. Tests revealed no structural damage after he sustained the injury on Sunday. ... New 1B Ike Davis was scratched from Wednesday's game with back spasms. The situation was not believed to be too serious, and he likely will return to action Thursday or Friday.

Francisco Lindor continues to make strides as the Indians' shortstop of the future. The 21-year-old hustled his way to a leadoff triple in the third inning and scored the team's first run, and showed good range in the field. The switch-hitting Lindor has played in a combined 21 games for the Indians in 2013 and 2014 and last season split time between Double-A Akron and Triple-A Columbus. Indians manager Terry Francona isn't quite ready to make a commitment to Lindor. But it might be soon.

"We love what we're seeing," Francona said. "How he plays (this spring) is going to dictate where he belongs."

The A's will play host to the Seattle Mariners on Thursday, with first pitch coming an hour earlier than normal. It is expected to be the first stop on comic Will Ferrell's tour of the Cactus League where he will attempt to play every position in five games. "We'll see if he falls into line," Melvin said with a smile. "If he gives me any lip, he will be in trouble."