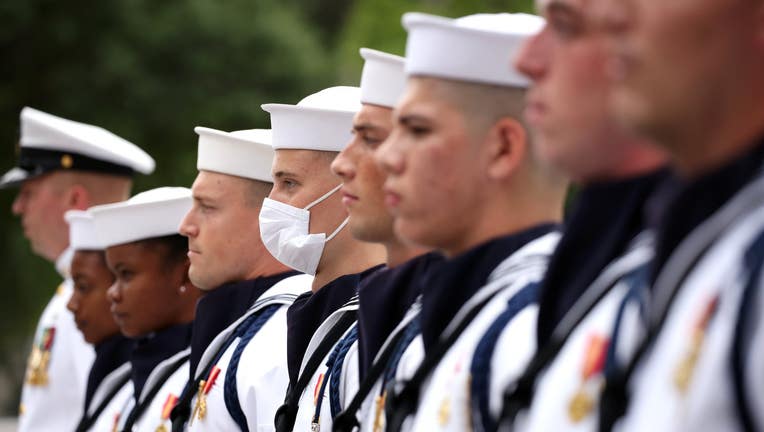 WASHINGTON, DC - SEPTEMBER 17: Members of the Navy Ceremonial Guard stand for the national anthem during a ceremony for National POW/MIA Recognition Day, at the U.S. Navy Memorial on September 17, 2021 in Washington, DC. The ceremony honored all mili

Some U.S. Navy sailors have been forced to take out loans over months-long delays in pay to some service members who earned increases in their housing allowances this year due to recent marriages or moving somewhere with a higher cost of living.

"This is happening a little bit of everywhere," Navy-Marine Corps Relief Society Vice President Gillian Gonzalez said in an interview with Military.com. "It doesn't seem to hit one geographic area more than another."

Gonzalez recounted that her group has seen an uptick in loan applications from sailors who are struggling to keep up with living expenses but did not have an exact figure on the increase.

Cmdr. Matt Knight, public affairs officer at Navy Personnel Command, told the outlet that the Department of Defense requires the Navy to process Basic Allowance for Housing change requests within 30 days, but noted delays can happen.

"Navy Personnel Command and our subordinate commands take every measure to ensure the volume of transactions does not exceed our capacity, but occasionally backlogs do occur due to a variety of reasons. These backlogs are resolved as quickly as possible to limit the impacts to sailors," Knight said.

He declined to provide details to the outlet on how many sailors are affected by the delays.

Gonzalez said that one sailor was not paid for three months due to an enlistment extension and pay error, and was forced to use up savings. Navy-Marine Corps Relief sent the sailor $2,500 to the sailor at home due to them being under COVID-19 quarantine.

Other sailors have spoken out about the issues on social media. One sailor posted on Reddit that she and her husband were married in July but had not received basic allowance for housing in the Washington, D.C., area. They took out commercial loans as a temporary fix, according to the post reported by Military.com.

"My case has been open for over a month with NO action … I am just … Beyond frustrated," the sailor wrote.

A personnel specialist first class told Military.com that the problem comes down to the consolidation of personnel support and customer support detachments that began in 2017.

"Shutting down dozens of processing centers took that transaction load and dropped it in one building’s worth of people," the anonymous petty officer told Military.com. "Our only means of communication with them is through [MyNavy Career Center, or MNCC], which isn’t always great because it’s [mostly] civilians with a knowledge database … all they can do is look up tickets and give a status."

The petty officer added that the 30-day timeline is "laughable" due to personnel specialists working on a sailor’s pay package and sending it to a processing system that has 30 days to work on it. The system then typically takes another 30 days to process, which is followed by another 30 to 45 days for review.

"In a Hershey and Hallmark world, 30 days would be great," he told Military.com.