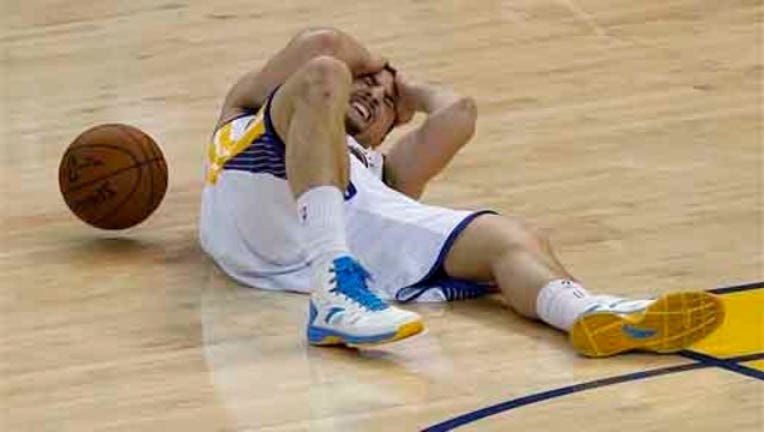 OAKLAND, Calif. (AP) — When NBA union chief Michele Roberts watched Stephen Curry return to a game after his head slammed against the floor and he walked woozily to the locker room, she immediately took a closer look the league's concussion protocols.

Two nights later, when Curry's Golden State teammate Klay Thompson was cleared to return after being kneed in the head only to later be diagnosed with a concussion, her reaction was much stronger.

"It mortified me," she said.

Now Roberts wants to take a closer look. The union has hired neurologists to examine the policy and determine whether any changes are needed to prevent players from playing with an undiagnosed concussion.

With the two high-profile head injuries in less than a week, the NBA is taking its turn in the concussion cross-hairs that are more often focused on the NFL and NHL.

The director of the league's concussion program, Dr. Jeffrey Kutcher, said the Warriors handled both instances properly even though Thompson later was diagnosed with a concussion.

Roberts is not convinced that players shouldn't be held out longer after being hit in the head out of caution. While stressing she is a lawyer, not a doctor, and that she will wait to hear what the medical experts tell her, she also said one player being allowed back in a game with a concussion is too many.

"That number is sufficient to make us all look at whether we want to risk a player's health for a game," she said. "To say it happens so rarely or doesn't happen frequently enough to change the rules is not enough. We're talking potentially about someone's life. I don't think we should play an odds game when comes to player's life."

When a player is suspected of having a possible concussion, team doctors or athletic trainers test a player's short-term memory and recall with cognitive tests, test balance and coordination, and make other observations based on the injury and the mannerisms of a player.

Still, brain injuries aren't as easily detected as a knee or ankle injury.

Kutcher said about 25 percent of concussions don't show symptoms until hours — or even a day — after the injury.

"That's just the nature of the injury," he said. "One of the fallacies that we deal with is the idea that every concussion can be diagnosed if only they would have looked hard enough. That is an absolute fallacy."

Curry returned to Game 4 of the Western Conference finals after he passed the tests twice. Thompson was also cleared in Game 5 but didn't end up playing again in part because he needed stitches to stop bleeding from his ear.

The combination of the delayed reaction and the added risk to a player who receives another blow to the head after already being concussed has some experts questioning why players are allowed back into games before doctors have definitively ruled out a concussion.

Chris Nowinski, a co-director of the Center for the Study of Traumatic Encephalopathy at Boston University, said the fact that both Curry and Thompson didn't immediately get up after being hit should be considered a sign that they probably were concussed.

"Doctors at the professional level aren't considering on-court symptoms as part of the concussion tests," Nowinski said. "If a player passes the test despite the fact we know it's far from perfect, doctors rarely feel confident enough to hold a player out. The GMs and coaches just listen to the doctor and don't make a decision."

Roberts knows talk of holding players out could be unpopular among her constituents, who are often more concerned about staying on the court than their long-term health.

And she's OK with that.

"It's not for them to decide," Roberts said. "They're not doctors."

The in-game system used in the NBA is similar to what happens in far riskier sports like the NFL and NHL. Head contact is far rarer — and much more visible — in basketball, so the risk of a second blow is much lower.

"We're not evaluating the patient, putting him back in the game and say 'See you in the clinic next week,'" Kutcher said. "We're evaluating them and if the determination is to go back into the game, the athlete is observed, re-observed and re-tested to look for signs or symptoms."

Kutcher also said that less than 20 percent of hockey players who receive questionable hits to the head are ultimately diagnosed with concussions. He expects that would be similar in basketball where concussions remain rare despite the two instances last week.

The NBA has averaged 13 concussions a season over the past four years since the protocols were first put in place. That's far less than the NFL, which reported 111 concussions in the 2014 regular season and 202 overall concussions with the preseason and practices included.

The decision about when a concussed player is allowed to return to the court is taken completely out of the player's hands. The team doctor makes the final decision on when a player returns in consultation with Kutcher.

A player must complete the NBA protocol before being allowed back to play. The protocol involves several steps of increasing exertion from riding a stationary bike, to jogging, to agility work, to non-contact team drills.

Players must be symptom free before advancing to the next step and if symptoms appear the player must return to the previous step.

Thompson was cleared to practice Monday but was checked out by trainer JoHan Wang every 15 minutes or so to make sure he was symptom-free. If he remains that way, Thompson will be cleared to play Game 1 of the NBA Finals on Thursday against Cleveland.

"That's what they've been doing the last couple of days: Monitor him, send him back out, continue to monitor him, check on him afterwards," coach Steve Kerr said. "He's doing fine."