Some younger individuals are borrowing money while others are turning to gig jobs.

Nearly 50% of 2020 college graduates were not able to find jobs amid the ongoing COVID-19 pandemic, according to a survey conducted by Monster.

Monster is a global recruiting agency that "leverages advanced technology using intelligent digital, social and mobile solutions" to connect people with the perfect job, according to the company website.

Approximately 1,000 people participated in Monster’s survey, and it was revealed that 45% of the class of 2020 were still jobless. 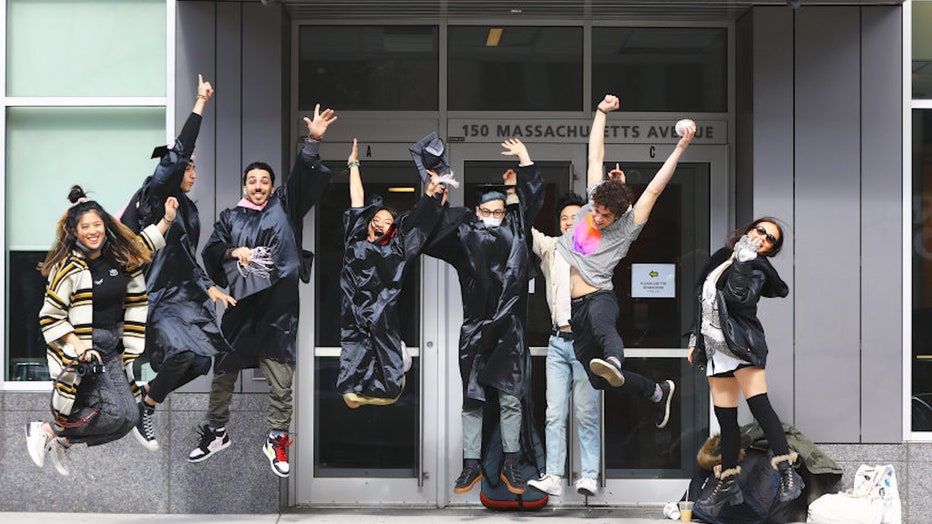 FILE - Some Berklee College of Music graduates, after getting graduation pictures taken on May 10, 2020 on Massachusetts Avenue in Boston.

Not only has the pandemic put a damper on the next generation’s spirit, but 85% of new graduates said their career goals were set back by at least a month or more with at least 29% of them expecting these setbacks to delay their careers for over six months.

Additionally, 66% of those same grads believe they will not land a career in their desired fields. "In fact, desperation drove about three-quarters of grads (73%) and 63% of non-college Gen Zers to take a job that didn’t fit their career goals," according to Monster.

One of the most common reasons recent graduates were taking jobs that were not in their desired fields was because they needed money, at 45%.

RELATED: Some people may have to return their $1,400 stimulus check

Another 25% said they felt they needed to gain experience before getting their desired jobs, with 14% saying it was due to parental pressure or the fear they wouldn’t get any other offers.

Interestingly, not only are new college grads worried about finding a job and making money, but they are also concerned about having to pay for the crippling impacts COVID-19 has had on the economy.

A majority — 69% — of recent and soon-to-be grads are expecting to take a huge salary cut as a result of COVID-19.

And just like the COVID-19 pandemic’s disproportionate impacts on communities of color in the United States, 77% of graduates of color are expecting "a lower starting salary as the result of COVID-19, significantly more than the 65% of their white peers who say the same. The gap is even starker among Hispanic grads (85%) to non-Hispanic grads (66%)," according to the survey.

To add more worry, recent graduates and Gen Zers are concerned that their resumes do not accurately reflect what they can bring to a new job.

"Sixty-three percent of college grads and 52% of non-college Gen Zers worry that their resumes don’t accurately represent what they bring to the table. Grads of color (70%) are more likely than white grads (61%) to have these resume worries. Nearly three in four Hispanic grads (73%) say the same, compared to 62% of non-Hispanic grads," according to Monster.

And while 68% of the incoming workforce feels employers will judge the career gaps in their resumes, surprisingly, only "38% of employers say resume gaps aren’t the red flags they were before COVID-19," according to previous data collected by Monster.

Generation Z seems a bit more optimistic about their chances should they get their foot in the door of their next big job.

"About seven out of 10 Gen Z grads say they’re overqualified for entry-level work. And 68% of graduates and 66% of non-college Gen Zers say entry-level work should last less than six months, before either getting promoted or moving to a different job," according to the survey.

And in a sign of the times, 85% of Gen Zers are concerned about losing the in-office experiences such as in-person coworker connections and on-site perks should they have to start working from home due to the pandemic.

Recent grads and Gen Zers are also willing to obtain jobs using less traditional methods. As opposed to suiting up and interviewing in person, both grads (68%) and non-college Gen Zers (60%) would be willing to accept a job offer entirely through text, the survey found.

"They’re also willing to go to the job if the job doesn’t want to come to them. The majority of grads (72%) and non-college Gen Zers (58%) would relocate for a job if the search took too long," according to Monster.

RELATED: Wages are only up because the bottom half of workers lost their jobs

And while recent grads are struggling to find full-time work, they have no problem taking on freelance or temp jobs while they search, with 23% saying they even plan to keep the temporary gig after finding full-time work.

"The long-term impact of the pandemic on college grads is yet to be seen, but our latest round of research shows a second graduating class tackling some really big obstacles just as they're getting started in the workforce," said Scott Blumsack, senior vice president, research and insights at Monster, told Tech Republic.