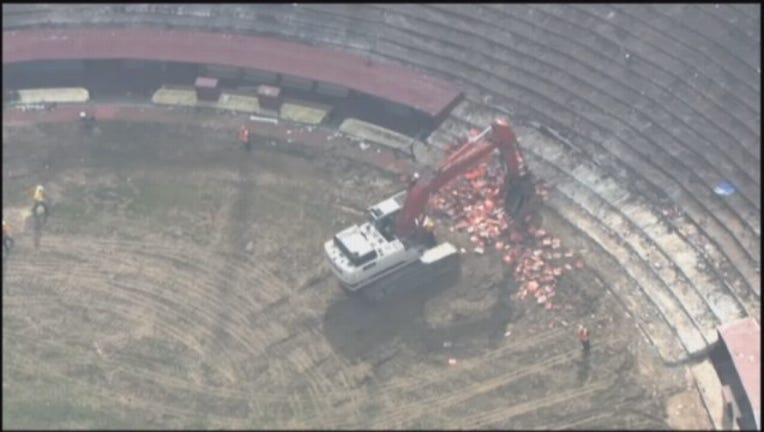 SAN FRANCISCO (KTVU) - Candlestick Park is coming apart at the seams. A new stage of the 'Stick's demolition began Thursday as a high-reach excavator began tearing away at ramps and stairwells.

It's the next phase of a scheduled five-month demolition. "It hasn't really been loud until maybe today," said Rebecca Weaver, a resident at a nearby RV park. "You've heard some noises over there so you know they're working."

Other residents worried that they are at risk. Candlestick Point Neighborhood Committee Chairwoman Shirley Moore fought to keep Candlestick from being imploded, but said the piece-by-piece demolition leaves much to be desired.

"What concerns me is the dust," said Moore. "We're just concerned about (the developer) violating the environmental dust plan."

Moore said the community needs to see them. "When we asked them about the monitors, they showed it to us in a Powerpoint, but they were unwilling to give us access to the site," said Moore.

The Bay Area Air Quality Management District says no asbestos issues have been detected so far. "Our air quality monitors are extremely sensitive," said BAAQMD Communications Manager Kristine Roselius. "So because they're located right at the site in the parking area, they should be a good indicator of any air quality issues."

Crews on Thursday sprayed water to keep dust from travelling too far as the excavator chipped away at the complex.