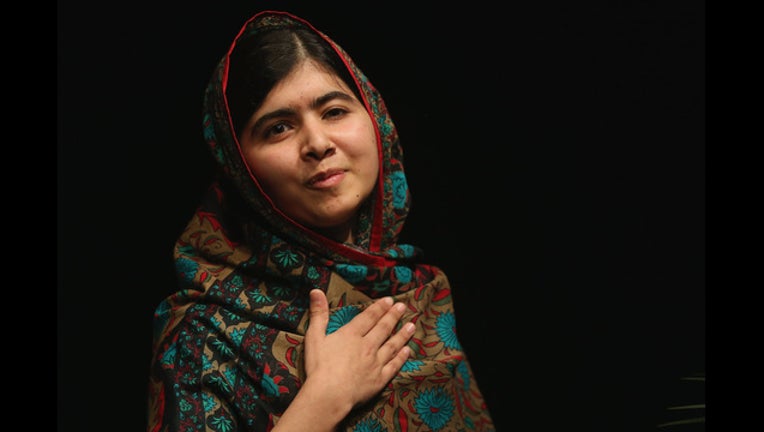 Malala Yousafzai speaks during a press conference at the Library of Birmingham after being announced as a recipient of the Nobel Peace Prize, on October 10, 2014 in Birmingham, England. (Photo by Christopher Furlong/Getty Images)

MINGORA, Pakistan (AP) - Pakistan's Nobel Peace Prize winner Malala Yousafzai returned to her hometown Saturday for the first time since receiving a gunshot wound to the head there in 2012 for her work as an advocate for young women's education.

Yousafzai and her family arrived in a helicopter provided by the Pakistani military, which took her to the town of Mingora in the Swat Valley from Islamabad. She had arrived in the capital before dawn on Thursday flanked by heavy security and plans to return to Britain on Monday.

Yousafzai, 20, won international renown after she was shot by the Taliban in Mingora. She received initial treatment in Pakistan and later was taken to England for further care. She stayed on in the United Kingdom to continue her education and became the youngest person to be awarded the Nobel Peace Prize in 2014.

Yousafzai entered her childhood home Saturday accompanied by her father, mother and brother. She sobbed upon entering the home where relatives, former classmates and friends had been anxiously waiting since morning to welcome her with flowers and hugs.

Youzafzai said she waited for the moment for more than five years and said she often looked at Pakistan on the map, hoping one day to return. She said she plans to permanently return to Pakistan after completing her studies in Britain.

"It is still like a dream for me, am I among you? Is it a dream or reality," she said.

Yousafzai later returned to Islamabad, where she met with human rights activists.

Arooj Bibi, a neighbor, said she was happy to meet with Youzafzai, but was sad because her visit was so brief. Bibi said Yousafzai "lit the candle of education. God willing, there will be thousands of girls like Malala getting an education" in Swat.

Yousafzai also attended a gathering at the army's Cadet College in Swat, where the Pakistani Taliban led by Mullah Fazlullah had taken over the scenic valley in 2007, marking the height of their strength there. The Pakistani military would later evict militants from the valley.

Security had been visibly beefed up in Mingora the previous day. The Pakistani Taliban had warned after the attack on the then-14-year-old that they would target her again if they got the chance.

Yousafzai had asked authorities to allow her to go to Mingora and Shangla village in the Swat Valley, where a school has been built by her Malala Fund.

In October 2012, Yousafzai was shot in the head by a Taliban militant who jumped inside her school van and yelled, "Who is Malala?" She was targeted for speaking out on education for young women. The Taliban at the time claimed responsibility for the shooting, saying she was promoting "Western thinking," adding that they had warned her family three times before deciding to kill her.

Since her attack and recovery, Yousafzai has led the Malala Fund in which she said has invested $6 million for schools and books and uniforms for schoolchildren.

Yousafzai has delighted in telling the Taliban that instead of silencing her, they have amplified her voice. She has also written a book, spoken at the United Nations and met with refugees.

On Friday, Yousafzai praised the Pakistan army in an interview on the independent Geo news channel for providing her timely medical treatment, saying her surgery was done by an army surgeon at the "right time."

Yousafzai has won praise from across Pakistan on her return home, but some critics on social media have tried to undermine her efforts to promote girls' education. Yousafzai told media outlets Friday that she expected criticism from militants, who had a particular mindset, but doesn't understand why some educated Pakistanis oppose her.

"Those who do criticize have an absurd kind of criticism that doesn't make any sense," she said in an interview with Pakistan's The News English-language newspaper published Saturday.

"What I want is for people to support my purpose of education and think about the daughters of Pakistan who need an education," she told the newspaper. "Don't think about me. I don't want any favor or I don't want everyone to accept me. All I care about is that they accept education as an issue."

In the interview, she said she was sitting in her classroom when news broke about her Nobel Prize and that she was not aware of it as she was not using her mobile phone at the time.

"My teacher came into my classroom and called me outside. I was worried that I might have done something wrong and I am in trouble. But she told me that I had won the Peace Prize. I said thank you. You don't know how to respond. For me, it was for the cause of education," she told the paper.