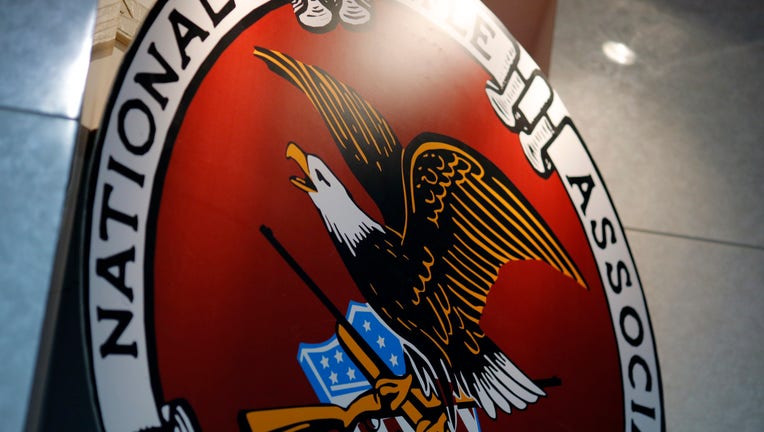 The logo of the National Rifle Association is seen at an outdoor sports trade show on February 10, 2017 in Harrisburg, Pennsylvania. The Great American Outdoor Show, a nine day event celebrating hunting, fishing and outdoor traditions, features over

“We’re pleased the NRA backed down on its frivolous lawsuit. This was a baseless attempt to silence San Francisco’s valid criticisms of the NRA and distract from the gun violence epidemic facing our country,” Herrera said in part in his written statement.

In September, San Francisco’s District 2 Supervisor Catherine Stefani authored a scathing declaration of the gun-rights group, followed by the full board of supervisors adopting a resolution that declared the NRA a domestic terrorist organization.

The NRA responded a week later with a lawsuit that said the city was infringing on its free-speech rights and was seeking to blacklist anyone associated with the group.

The following month, NRA declared “victory” over San Francisco after SF Mayor London Breed had told city departments in a letter to ignore the supervisors’ resolution that gave the NRA its terrorist organization distinction.

The NRA said Breed was backing down and that she had made a “clear concession” in response to their lawsuit.

“San Francisco will never be intimidated by the NRA. If the NRA doesn’t want to be publicly condemned for its actions, it should stop sabotaging common sense gun safety regulations that would protect untold numbers of Americans every year, like universal background checks, an assault weapons ban, and restrictions on high-capacity magazines,” Herrera wrote.

Although the suit has been dropped, William A. Brewer, an attorney for the NRA, called the move a "victory" for the NRA.

"Today the NRA withdrew its lawsuit in SF--and now celebrates the important victory it obtained on behalf of its members. As has been widely reported, after the Association challenged the unconstitutional resolution, the city beat a hasty retreat and backed down from its wildly illegal blacklisting scheme. The censors are on notice. The NRA will always fight for the Constitution, and will re-file if the city tries anything like this in the future," he said.