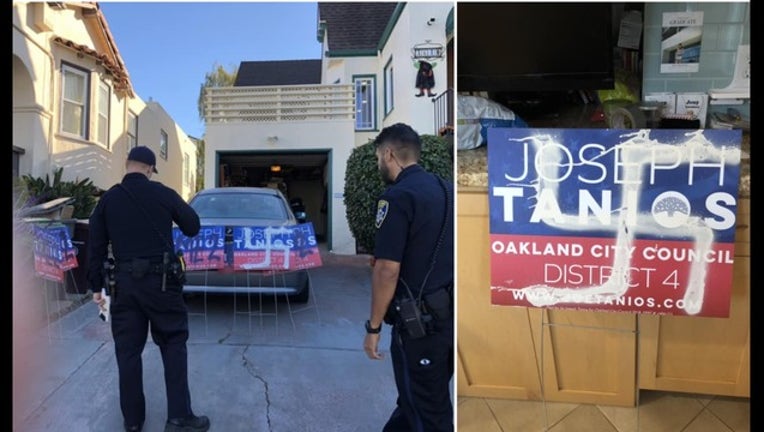 Joseph Tanios, a Lebanese American Oakland City Council candidate, said Friday that his campaign signs have been vandalized with swastikas and other messages.

OAKLAND, Calif. (KTVU) - A Lebanese American Oakland City Council candidate said Friday that his campaign signs have been vandalized with swastikas and other messages.

Joseph Tanios, who is one of six candidates running for the District 4 seat being vacated by Annie Campbell-Washington, said in a news release, "Swastikas and other messages of hate have been painted on my campaign signs. It is disgusting."

Tanios said he is "saddened and outraged" by the swastikas, particularly in the wake of the recent fatal shooting of 11 people at a synagogue in Pittsburgh.

Tanios said, "I do not know why I am being targeted. I have not received any communications explaining why I was targeted."

Tanios vowed, "I will not be held hostage to hate, bigotry and racism. I am proud to be Lebanese American citizen."

He said, "We must not allow these faceless, cowardly vandals to degrade the election process and our democratic principles. For each sign they steal, I will put up new signs. I will not bow down to these cowards."

Tanios said the swastikas don't represent the values of Oakland or District 4 and praised Oakland for being "one of the most diverse cities in the nation."

He said, "This is the city I have chosen to live for 24 years and raise my two daughters. This is the reason I chose to run for council member. I wanted to give back to the city that has given me so much."