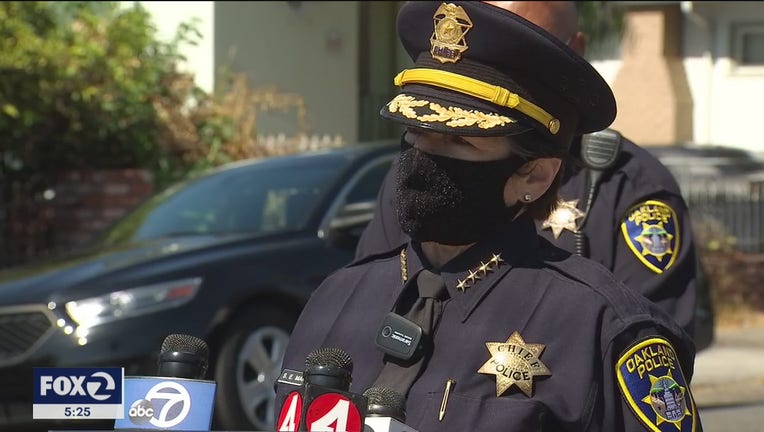 OAKLAND, Calif. - Oakland police are linking at least some if not most of a recent
surge in gun violence in the city to conflicts among gangs and groups.

Five people died over a span of five days in the past week in gun
violence in Oakland, police said.

Fifty-one people have been killed in homicides in Oakland so far
in 2020, compared with 46 at this time a year ago, according to police.

"We are seeing a major spike in gun crime and shootings in many of our major cities in this quarter," interim Oakland Police Chief Susan Manheimer said at a news briefing Monday.

Oakland police are struggling to convene "the type of group and
gang mediation meetings" that they did before the COVID-19 pandemic began, Manheimer said.

"We need to come up with other strategies," she said.

On Saturday evening, Darius Brazell, 55, of Oakland, was shot and killed at Lakeshore Avenue and Mandana Boulevard and late Friday night, a man died in a shooting in the 1500 block of 92nd Avenue.

On Thursday, one man died in a shooting in the 4500 block of
Fairfax Avenue.

Dramatic spikes in homicides have also occurred recently in cities
such as Austin, San Antonio, Nashville and Denver, police said.

Some are surging gun sales, anxiety and dislocation amid the
pandemic, and distrust of and alienation from law enforcement, Freilich said.

Most types of crimes are falling in most U.S. cities.

"Gun violence and murder appears to be a tragic exception," he
said.

Freilich said a surge in gun sales may be causing arguments to end in a shooting rather than a fist fight.

Distrust and alienation from police may be keeping people from
reporting possible crimes and instead taking justice into their own hands.

According to the Giffords Law Center, Oakland shrunk shootings and homicides by 50 percent between 2012 and 2018.

So, the talk about an uptick in violent crime is really a ploy by
police to avoid cuts to their budget, said the Rev. Michael McBride, pastor of The Way Christian Center and director for the Live Free campaign with the Faith in Action national network, which aims to address gun violence and the mass incarceration of young people of color.

"It's a cynical and wicked ploy," McBride said. "I'm deeply
offended by it."

He said if law enforcement were the answer to public safety, U.S.
cities would be the most peaceful places in the world.

McBride thinks police and politicians need to have the audacity to
scale up what works.

The "scaling up of community-based alternatives," he said. "That's
what works."

He suggested emphasizing the city's Department of Violence
Prevention and the Ceasefire community-police partnership that aims to reduce gang/group-related shootings and homicides, among other alternatives.