Civil rights attorneys alleged on Wednesday that Oakland police violated their own crowd control policy and city law when they unleashed tear gas and flash-bang grenades at peaceful protestors mourning the death of George Floyd, calling it the worst example in the last eight years.

OAKLAND, Calif. - Civil rights attorneys alleged on Wednesday that Oakland police violated their own crowd control policy and city law when they unleashed tear gas and flash-bang grenades at peaceful protestors mourning the death of George Floyd, calling it "the worst" example in the last eight years.

Hours after the letter was obtained and published by KTVU, the police department held a news conference, saying that at certain times and under certain conditions they may use these "crowd control tactics," which include smoke and gas.

Manheimer was responding to a letter sent to her earlier in the day by Jim Chanin and Rachel Lederman, the attorneys who helped craft the department's crowd-control policy.

The lawyers said the department was wrong to fire off specialty munitions and explosive grenades directly into a crowd of protesters on Friday night. They also said police wrongly used chemical agents, namely tear gas, again on Monday, and failed to cite and release protesters, as required by OPD's own policy.

Police, by law and court order, must use de-escalation techniques first, before deploying such harmful, although less-lethal, agents and tools, they said.

The department's policy places special restrictions on the use of dangerous weapons such as flashbangs and tear gas precisely because those breaking the law might be mixed with peaceful passersby, along with legal observers and journalists.

"This indiscriminate use of force may have been precipitated by a few individuals throwing water bottles and setting off fireworks," the lawyers wrote. "Yet this is exactly the type of challenging situation that the Oakland Police Department had in mind when it adopted the policy." 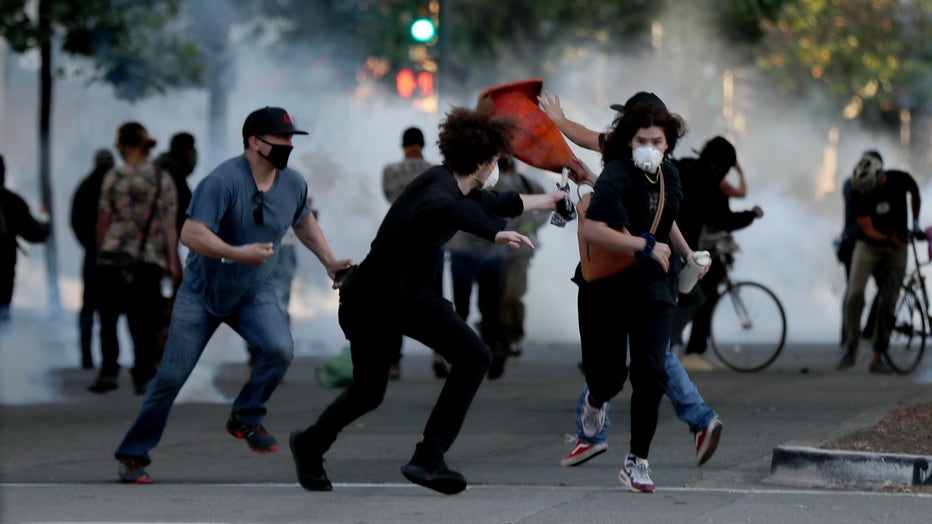 OAKLAND, CA - JUNE 1: Protesters run away as police shoot tear gas and flash grenades to disperse the crowd on Broadway near the Oakland Police Department during the fourth day of protests over George Floyd's death by the Minneapolis police in Oaklan

The policy was adopted in response to a 2003 anti-war protest at the Port of Oakland in which police fired tear gas, concussion grenades, wooden dowels, and other non-lethal projectiles into the crowd, injuring protestors and longshoreman.

While the department has been faced with challenges recently, such as looting over the past few days alongside the peaceful protests, the lawyers said "this cannot be allowed to justify the fact that OPD's current violations of its own crowd control policy are the worst since 2012, eight years ago."

The lawyers' letter was sent just as three city councilmembers also asked the mayor and the police department to immediately stop using tear gas on protesters, saying the chemical agent is made especially worse during the coronavirus pandemic.

OAKLAND, Calif. - Oakland's Interim Police Chief Susan Manheimer addresses the criticism of the department's use of tear gas and flash bangs at anti-police brutality protests, during a news conference on June 3, 2020.

Oakland police did not respond directly to KTVU seeking comment.

But at the news conference, Manheimer and Deputy Police Chief Leronne Armstrong clearly laid out that police are there to facilitate peaceful protesters.

But both said they must resort to other crowd-control tactics when "professional agitators" and "violent disruptors" set fires, throw Molotov cocktails, rocks and bottles at them.

Manheimer said that her department does have a right to use tear gas "when there is an immediate threat to officers" or severe damage to property, along with the nod of approval from a "high-level commander."

She added that in her 35 years, she has never seen such violence and vandalism among a small group of protesters.

Manheimer added that police often resort to gas or smoke as a means of getting the crowd to break up so that they don't have to arrest people.

Chanin countered that's exactly wrong: Police must first cite and arrest people and then use gas as a final option.

Also, Chanin and Lederman emphasized that the story police are describing is not the story they're hearing from protesters. And that at least some of the people who got gassed were not the "violent agitators" that police described.

A woman in her 30s contacted them to describe what she felt was "excessive force" about 7:35 p.m. on Monday, a block from the police department. She said an announcement to disperse was made a "couple of seconds prior to the bombardment of tear gas canisters and flash grenades."

She said many did not hear the announcement and she and others were not given any time to get out of the way.

"The entire block between 8th and 9th St. was filled with a virtual wall of CS (tear) gas that we were forced to maneuver through despite trying to disperse as ordered," she said.

She said she was walking with a friend who uses a cane and could not physically run when it was deployed.

"I began to lose my vision and my lungs seized," she wrote. "There was nearly a full minute where I was not receiving oxygen."

Noting the fact that chemical agents and tear gas can exacerbate COVID-19 conditions, the two lawyers also said that in their opinion, there was "nothing indicating that there was any large scale aggression from the crowd necessitating this particular police use of force."

The lawyers used similar examples from Friday night as well, citing a situation that night when a person was trampled while he or she was trying to emerge from the blasts and the chaos.

There are multiple accounts of innocent people getting hurt.

Chanin and Lederman showed an example of a young man who was at least half a block from the police line, but who was hit by what looks like a bean bag. He has no health insurance, the lawyers wrote, and cannot afford to take care of his open wound.

Chanin and Lederman reminded the police chief that these restrictions were put in place, and adopted by the department and the city, to avoid what happened in 2011 to Scott Olsen.

The young veteran was accidentally struck in the head with a police bean bag at an Occupy Wall Street demonstration, and he never regained full mental function.

And not only that, Chanin and Lederman said that despite the fact that Armstrong said no one was taken into custody on Monday after being arrested, there were indeed several people who spent the night in a small cell at Santa Rita Jail.

The lawyers said that this violates a penal code, which mandates citing and releasing people for misdemeanors.

In addition, the lawyers pointed out that the statewide emergency order has eliminated bail for many offenses to reduce the number of people in crowded jail cells because of coronavirus.

Yet many people have still been booked and not released until National Lawyers Guild attorneys have come to advocate for them.

IF YOU'RE INTERESTED: Anyone who feels their rights were violated by Oakland police can fill out a complaint form here.