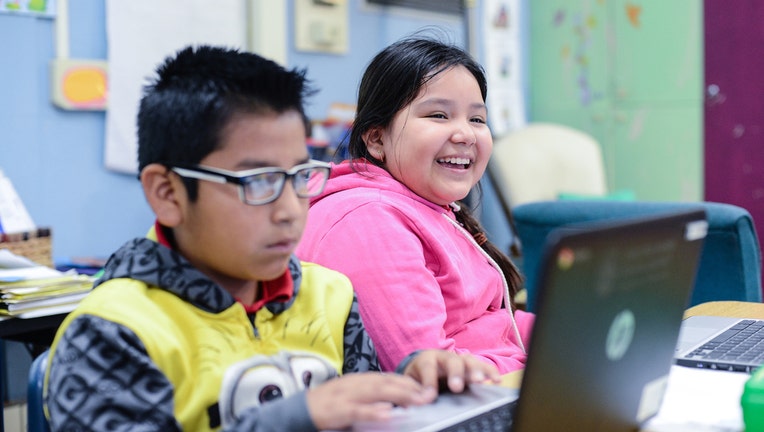 About half of Oakland Unified's 50,000 students don't have computers or internet. (OUSD)

The meeting started about 5 p.m. and was available on Zoom in English, Spanish, Arabic and Chinese until Zoom reached its limit of 1,000 users, prompting school leaders to ask families to watch on YouTube.

School officials emphasized that the plans they described Thursday evening were not final, but one option for all families is distance learning for the entire year.

"What we're sharing tonight is not the final plan," Superintendent Kyla Johnson-Trammel said.

She said she wants to avoid using the word "final" because while school officials have greater clarity on what school in the fall will look like, it depends on several factors.

Clarity has come recently in Assembly Bill 77, which says instruction should be in-person to the greatest extent possible.

But school district leaders said that what school will look like in the new year depends also on negotiations with the labor leaders, and guidance from the state and county.

The ideas school leaders shared Thursday evening were based partly on what they have heard from families so far.

School leaders had planned to give families the opportunity to provide feedback during the meeting in breakout groups on Zoom, but that was not possible because of the limit to participation on Zoom.

Instead, families can provide feedback about their preferences for transportation, childcare and the school schedule in a survey here. The survey closes July 9.

The presentation school leaders made Thursday evening can be watched here.

Assuming children go to school in-person at all, school leaders are proposing phased approaches depending on how safe it is for students to be on campus.

At the elementary school level, for example, a phase one approach would provide small-group, on-campus instruction for some students, while others would check in with their teacher on campus on Monday and check out on campus on Friday.

Phase two would involve in-person instruction for groups of eight to 10 students one day a week. A different group of students would be taught on campus on Mondays, Tuesdays and Wednesdays. Phase three would involve groups of 12 to 16 students in campus classrooms.

The daily instructional minutes required in the coming year will be the same as in previous years for kindergarten students, but for students in grades six through 12 it is significantly lower, district leaders said. But the minutes for those students will count whether they are in-person or online.

The number of instructional days for all students will remain unchanged at 180.

Sailaja Suresh, COVID-19 action team coordinator for OUSD, said during the meeting, "This is a status update for the community" and leaders want to know from students and parents what else needs to be addressed.

Another community meeting like the one Thursday evening will take place on July 13 from 5 p.m. to 7 p.m. when final or close-to-final plans will be shared with families. Families can get the details for that meeting at ousd.org/calendar.