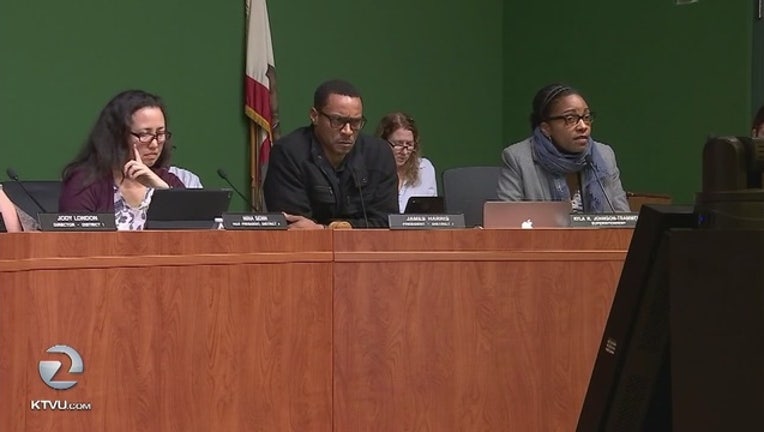 The Board of Education approved the mid-year budget cut during a contentious meeting Wednesday despite pushback from teachers and education advocates.

The layoffs and other actions will go into effect in March, according to John Sasaki, a spokesman for the district. Sasaki said he could not give a ballpark estimate as to how many people would be laid off. Those affected will be notified in January, he said.

"Our HR staff said they cannot put exact numbers on how many people will be affected," Sasaki said.

"Senior leadership did agree to salary givebacks," Sasaki said. This means members of senior leadership, such as superintendents and senior business officers, would agree to work without pay.

"They can choose between one and 10 days" to do so, the spokesman said. There are about 40 people on the senior leadership team, he said.

"This speaks to how seriously they are taking the situation and how they are willing to go the extra mile," the spokesman said.

Another approach: "If your job is eliminated, you could be bumped - moved to a job that is lower level that is open," which would mean taking a pay cut, Sasaki said.

"Nobody here wants to lay anybody off," Sasaki said. "We are all part of the family dedicated to the young people of Oakland. No matter what job you have, we know you are working hard for the students.

"A loss anywhere is a loss to all of us," the spokesman said.

The $9 million in cuts is divided between $3.8 million at school sites and $5.2 million in central services, district officials said.

"Our goal is to keep reductions as far from the classroom as possible, but the reality is, we can't keep all cuts away from our schools," Superintendent Kyla Johnson-Trammell said in a statement.

The reductions are necessary to keep the district solvent and help steer clear of state receivership, district officials said.

Marc Tafolla, director of policy for the nonprofit GO Public Schools Oakland, said in an email sent Thursday, "This is an important action taken to balance the budget and retain local control."

Members of the Oakland Education Association, a union representing OUSD teachers, Wednesday urged the district to cap the budget cuts at just over $1 million. That's the bare minimum required to meet reserve funding requirements and avoid a state takeover of the district's finances.

Craig Gordon of the advocacy group Classroom Struggle said the budget cuts would hurt schools, students and programs for students. He said the district never adequately made the case that it was at risk for being taken over by the state.

"The state could come in and cut immediately with no obligation to receive input from the community, district staff or leadership. We have every reason to believe the state would make dramatic arbitrary cuts, which could include the immediate closure of schools," James Harris, the president of the Board of Education, said in a statement.

The $9 million in savings will go to fill a $1.1 million hole in the state-mandated 2 percent reserve and $3.9 million to cover what are called specified risks, district officials said.

These are budgeted items that consistently come in over budget, such as special education, transportation and nutrition services.

The savings will also include $4 million to cover unspecified risks, which are unforeseen costs such as payments made in case of emergencies, district officials said.