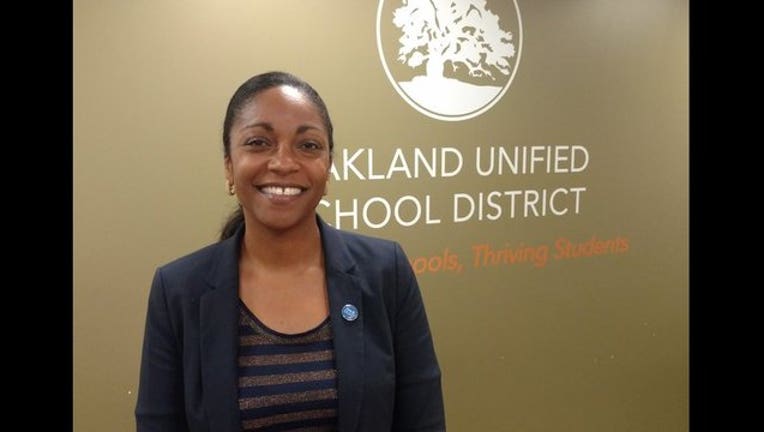 OAKLAND (BCN)-- After a months-long search for a new superintendent for the Oakland Unified School District, the school board announced this evening that Kyla Johnson-Trammell has been selected for the position.

If the full board approves the selection of Johnson-Trammell, she will succeed former superintendent Antwan Wilson, who left at the end of January to lead a school district in Washington, D.C.

Johnson-Trammell, who's been with the district for 18 years, is currently serving as the district's interim deputy superintendent.

Johnson-Trammell was born and raised in Oakland and her family has lived in the city for three generations. Having attended Montclair Elementary School and Montera Middle School in the past, she is an advocate for
Oakland's public schools, school district officials said.

"I am honored by this opportunity to guide such an important organization in my hometown. To lead the teachers and staff of OUSD has been a dream of mine since I first stepped into a classroom as a professional,"
Johnson-Trammell said in a statement. "I am excited by the progress our district has made and look forward to tackling the challenges that lie ahead," she said.

"Kyla embodies in so many ways everything the community was looking for in a superintendent," said Ash Solar, executive director of GO Public Schools Oakland, a non-profit organization focused on education
advocacy.

GO Public Schools Oakland assisted the district in the search for a permanent superintendent by convening community groups, parents and teachers to establish the qualifications and values needed for the position,
according to Solar.

School district officials said a diverse group of people applied to become Oakland's superintendent of schools, with over 50 percent identifying as people of color and 37 percent as female, according to the
Oakland Unified School District.

Of the 35 applicants for the position, nine were African American, eight were Latino and three were Asian. Of the remaining applicants, 12 are Caucasian and three were of unknown background, according to numbers released by the district.