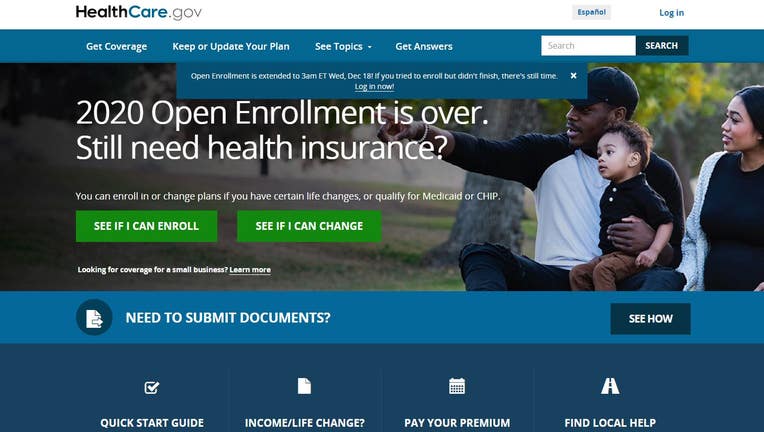 WASHINGTON (AP) — - People will get more time to sign up for “Obamacare” health insurance, the Trump administration announced Monday, following a spate of computer glitches over the weekend.

The new HealthCare.gov deadline is 12 a.m. Pacific Standard time on Wednesday, the Centers for Medicare and Medicaid Services said in a statement. Coverage takes effect Jan. 1.

It was the second round of problems with online sign-ups for the agency in weeks. Senior lawmakers of both major parties are urging the administration to publicize the availability of a redo for seniors who got inaccurate or confusing results using the Medicare Plan Finder. A redesign of the Medicare site produced search results that didn’t automatically rank the prescription drug plan with the lowest total cost first.

On Monday afternoon, the HealthCare.gov website displayed an alert telling people about the deadline extension. But it was in a small font, and a much larger banner directly below still said open enrollment was over, potentially creating confusion.

The problems started Sunday, which was the original sign-up deadline. The last day of open enrollment is always the busiest, with hundreds of thousands of people going online or trying to reach the call center.

A group founded by former Obama administration officials said people using the website and the call center ran into delays and other problems. Get America Covered, as the group is known, urged the Trump administration to extend the sign-up period by 48 hours.

The CMS agency, which oversees Medicare, Medicaid and the Affordable Care Act, said more than half a million customers were still able to enroll Sunday despite technical problems. Officials said the extension is being granted out of “an abundance of caution.”

People who already left their names and contact information with the call center on Sunday don’t need to come back and reapply because a representative will follow up with them later in the week, the agency said.

About 20 million people total are covered under the Obama health law, and roughly half of them get subsidized private coverage through HealthCare.gov and state-run insurance markets. Despite President Donald Trump’s ongoing efforts to repeal “Obamacare,” enrollment has held fairly steady during his term.