MORAGA, Calif. - Some residents in Moraga are taking extra precautions because of coyotes roaming their neighborhood.

A man was bitten by an animal at Moraga Country Club Friday night, and Fish and Wildlife investigators are trying to determine whether it was a coyote.

If it’s confirmed, it would be the second time a person Moraga has been bitten by one in just over a week.

For some residents living near where the incidents happened, the situation is unsettling and potentially dangerous.

Security video taken recently outside a home near Moraga Country Club shows a coyote meandering through a yard.

Homeowner Marisol Greenlee says, in April, the family’s beloved 12-pound dog was killed by a coyote.

“At the start of Covid-19, a coyote right here in front of our house, just right here by our feet,” said Marisol Greenlee.

Friday night, around 10pm, police say a man sitting with others around a fire pit at Moraga Country Club was bitten on his leg by something no one saw.

He’s been treated for the bite and Fish and Wildlife are investigating whether it was a coyote.

Residents report seeing up to five coyotes together at a time.

“I'm going to start doing my route a little differently, or at least taking some rocks and sticks and things like that with me,” said Carol Tessler. 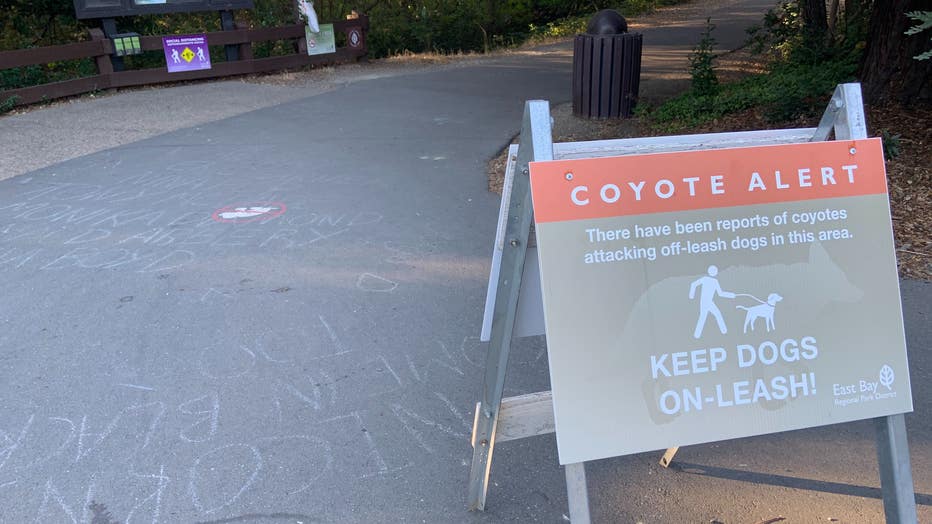 Police temporarily closed Moraga Commons for a day after a two-year-old was bitten by a coyote in the parking lot late last week.

Residents say coyotes have been more active in recent months, and the animals seem to have little fear, even during the day when kids are playing outside.

“A coyote came down the hill. We weren't sure if he was coming towards her exactly but, oh, you know it kept coming down the hill and my husband had to chase it away,” said Gita Kefiraju.

“We try our best to make noise and try to scare them away, but it really hasn't deterred them too much,” said Greenlee.

Greenlee says she’s putting up a fence to protect the two new pups her family got to replace the dog that was killed.

Her neighbor, Gita Kefiraju stopped letting her dog out without supervision.

“We don't send him out in the front yard at night anymore to go to the bathroom.  We’re out there with a leash with all our lights on,” said Kefiraju.

Police are working with Fish and Wildlife to try and get a handle on the coyote conundrum.

Residents say something needs to be done to make the coyotes stay away so residents and their pets can enjoy the outdoors.

First, it was the pandemic keeping people inside more often, now it’s the coyotes.

“After shelter in place this year, They have come down to our doors, to our driveways, just walking up and down the street as if they own the place,” said Kefiraju.

A 20-year veteran of the police force says he’s never heard of someone in Moraga being bitten by a Coyote, until recently.

Fish and Wildlife are working to determine whether the man at the country club was bitten by a coyote, or something else.

If it’s confirmed the bite was from a coyote, it’s unclear how officials will proceed to try to stop another potential attack.