One killed in shooting outside Oakland sports bar

Police are investigating a deadly shooting at a sports bar in downtown Oakland, where one person was killed and at least two others were wounded, just hours after the Warriors championship game ended.

OAKLAND, Calif. - One man is dead, and at least four others were injured, after a shooting outside of two bars at 14th and Harrison Streets in Oakland on Thursday night.

Police were called just before 10:30 p.m. Thursday night to the 300 block of 14th Street where paramedics pronounced a man dead at the scene. While the two bars were both full of fans celebrating Thursday night’s Golden State Warriors victory, there is no information yet about the exact circumstances of the shooting.

On Friday, bullet holes riddled the windows of the Gallery Art Bar with police evidence markers still visible. The bar sits right next to the Halftime Sports Bar — both bars were open and full of patrons at the time of the shooting. 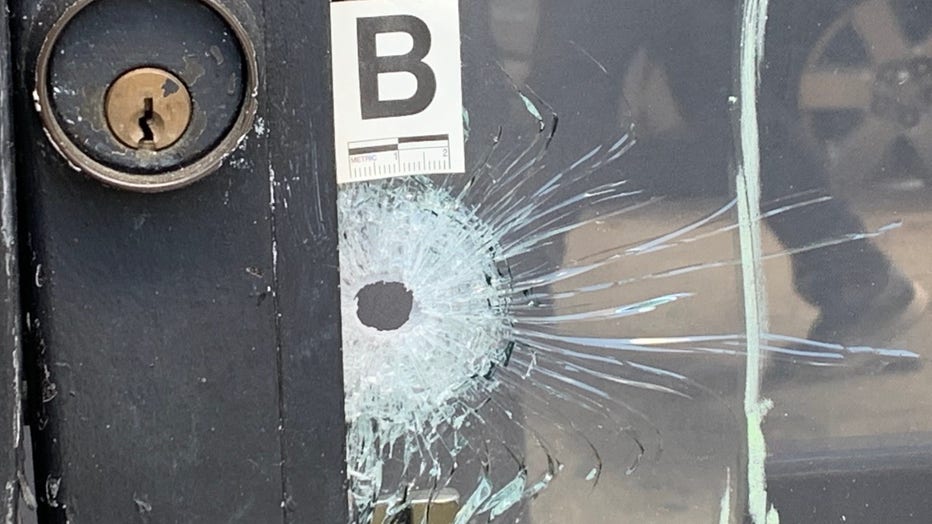 Photos of evidence markers from the shooting Thursday night at 14th and Harrison streets in Oakland.

A car belonging to one of the employees who was working inside the Halftime bar Thursday night had a bullet hole in its side, but the employee says she does not believe anything happened inside the bar before the shooting.

"It is unfortunate that we are being targeted and they are continuing to target the vicinity or the business because it literally — it had nothing to do with the business. It was an unfortunate situation where wrong place, wrong time," said Y.S. Choice, who works in the kitchen at the bar.

The Oakland Police Department says one victim was pronounced dead at the scene. Another victim, a woman, also sustained gunshot wounds and was transported from the scene to a local hospital. Shortly after the shooting, police say three additional adult male victims arrived at a hospital with bullet wounds which police later connected to the 14th Street shooting. In all, there were at least five victims.

"We were shocked, we were devastated. We could not believe it. Like I said, that is my daughter’s car outside, the owner of the bar was devastated — we were all devastated," Y.S. Choice said.

Workers in the neighborhood were rattled when they arrived at their businesses on Friday morning. Craig Watts works at Orbit Coffee and Kitchen which is just feet away from the shooting scene.

"All I saw was all of these casings right here for the bullets and all of my customers are telling me that somebody died next door. And it kind of worries me because, what if I got shot or something," Watts said. 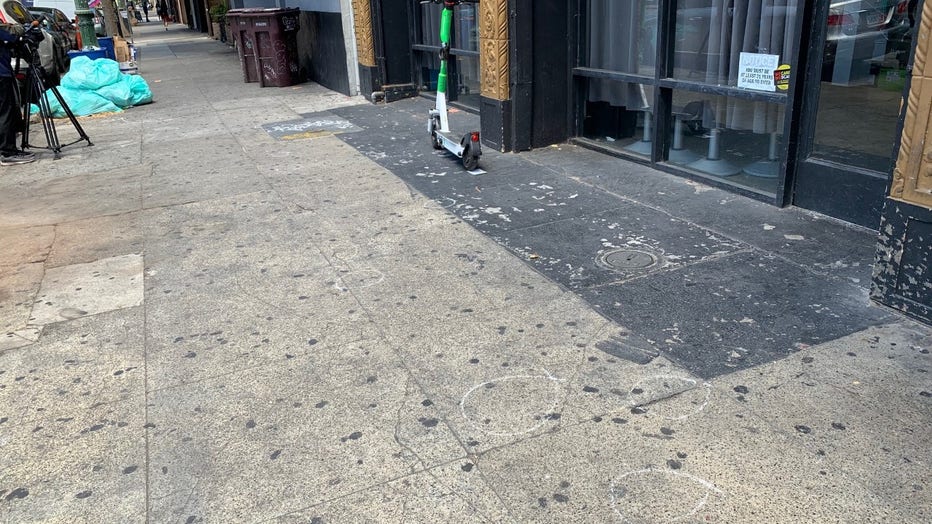 Photos of evidence markers from the shooting Thursday night at 14th and Harrison streets in Oakland.

"Last night’s tragic violence in Downtown Oakland, resulting in one death and four individuals shot, is unacceptable and heartbreaking. We will not tolerate this level of violence in our city, and we will keep working together to get guns off our streets and address violence at its roots.

As we look towards celebrating Juneteenth, a hard-fought recognition by African Americans of emancipation from slavery, let us not forget that true racial, social and economic justice is still a dream and goal to be achieved and not one that has yet been met. As we celebrate Juneteenth with joy, let’s celebrate peacefully with a renewed call to action for justice.

Let’s bring our Oakland #LoveLife spirit into this weekend at Juneteenth events at Lake Merritt and across Oakland, as well as tonight’s first evening of our Department of Violence Prevention’s Town Nights events throughout the city, Saturday’s World Refugee and Immigrant Day Festival in Little Saigon, and celebrations of our culture and sports with the Warriors’ victory. Let’s look out for and lift up each other."

Police have not released any suspect information at this time.