OPD is improving, but federal monitor is closely watching how police handled protests

Oakland police are doing better in terms of how they investigate uses of force and racial profiling, among other things, but a federal monitor charged with overseeing the department also said he is closely watching how the police department handled the mass protests in the city in the name of George Floyd.

OAKLAND, Calif. - Oakland police are doing better in terms of how they investigate uses of force and racial profiling, among other things, but a federal monitor charged with overseeing the department also said he is closely watching how the police department handled the mass protests in the city in the name of George Floyd.

In his regular updates to the department, Federal Monitor Robert Warshaw on Tuesday listed off several areas where police have improved.

As examples, Warshaw commended a review board of high-level commanders, which conducts use-of-force investigations, for doing a good job sorting through complex investigations and he put the department into compliance in this category. Warshaw also noted that the 'stop data' collected shows that the number of Blacks who were stopped by police had dropped significantly.

However, in the conclusion of his report, Warshaw wrote: "Over the last two months, Oakland, like so many cities around the U.S., has experienced mass demonstrations against police brutality, galvanized around calls for defunding police departments. The encounters between the Department and demonstrators have been serious episodes. Accordingly, we are closely monitoring the Department’s handling of these events – including the staffing and supervision of officers, officers’ uses of force during the demonstrations, and the Department's capacity to address complaints in a thorough and timely manner."

In an interview, civil rights attorney Jim Chanin noted that the improvements were "very slight," but at least the police department seemed to be moving in the right direction, a change from the past year and a half under ousted Chief Anne Kirkpatrick.

Chanin and co-counsel John Burris filed the suit against the police department nearly 20 years ago, which put OPD under federal oversight. To free itself from this monitoring, Oakland police must complete about 50 tasks. They are currently out of full compliance with 7 of those tasks. 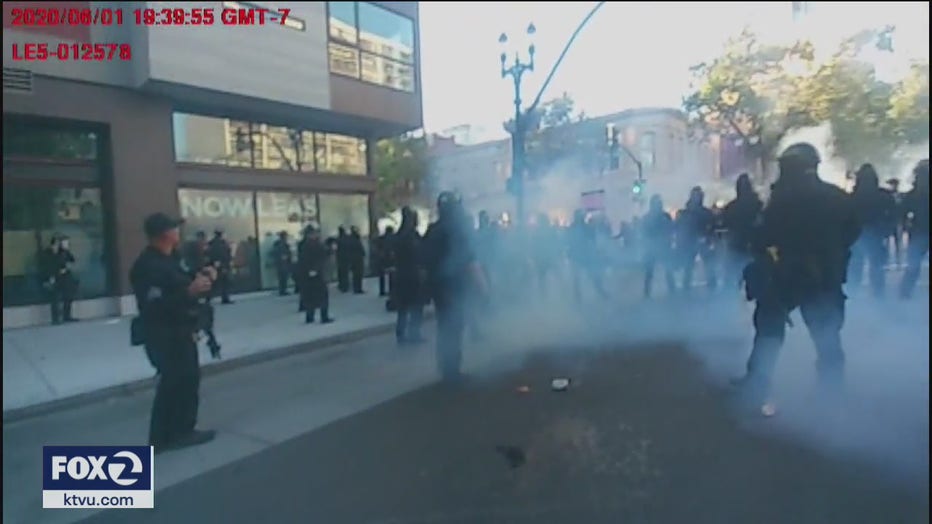 While Warshaw didn't cite any particular protest, Oakland police did aunch tear gas and projectiles at hundreds of protesters on June 1, one of many protests held in the wake of George Floyd's death. This particular demonstration was organized by youth, and it originated at Oakland Tech.

However, about 7:40 p.m. - 20 minutes before the city's 8 p.m. curfew was to take place - police said they felt threatened by the crowd and they dispersed the gas, which Chanin said was a violation of the city's longstanding court order against these type of chemical agents.

Oakland police, by law and court order, must use de-escalation techniques first, before deploying such harmful, although less-lethal, agents and tools, Chanin said. Witnesses at the scene said these methods did not occur.

At first, the city's Interim Police Chief Susan Manheimer and Deputy Police Chief Leronne Armstrong said it was because people in the crowd were preparing Molotov cocktails and police feared for their safety.

Later, after witnesses came forward to KTVU, the Oakland Police Commission and civil rights attorneys to say nothing of the sort occurred, the pair backed off their original statements and promised to look into the matter.

Attorneys Dan Siegel and Walter Riley have filed a federal lawsuit over the use of the tear gas. They are representing the Anti Police-Terror Project and they are trying to prevent Oakland police from using tear gas and other weapons of war against demonstrators in city streets.

At a federal court hearing on Tuesday, the attorneys were debating whether a Molotov cocktail actually even existed.

Riley said that his team has not been able to verify that such an explosive device actually was present, though U.S. Magistrate Joseph C. Spero said that Alameda County Sheriff Greg Ahern said one of his deputies was burned by one. No more specifics were provided. Oakland police and mutual aid agencies, which included the sheriff, also launched tear gas on May 29, which was a violent night that saw a federal guard killed, fires set and major looting around the city. It's unclear what date the two sides were talking about.

Meanwhile, Manheimer said she would provide a report on the use of her department's tear gas by Dec. 1, six months after the incident occurred.

Chanin said he welcomes a thorough investigation by Oakland police.

"We'll see if they hold the officers accountable," he said. "We will see if IA can do a thorough job, or if it's a whitewash."