OAKLAND, Calif. - For the first time on Monday night, top brass at the Oakland police department acknowledged that the tear gas and flashbangs deployed after a youth-led protest over the death of George Floyd one week ago should be more thoroughly investigated.

The criticism that has been mounting since the June 1 rally at Oakland Tech High School "has not fallen on deaf ears," Deputy Police Chief Leronne Armstrong said during a town hall meeting hosted by the citizen-led Oakland Police Commission.

"We will be taking a thorough look at each and every time " munitions were deployed, Armstrong said.

And the department will "look at whether this was within policy," he said. "If we made mistakes, we'll acknowledge those mistakes."

Armstrong also for the first time acknowledged that it was possible that the crowd of about 1,000 protesters did not hear the command over the police loudspeaker to disperse from 8th and Broadway in front of the police department about 7:35 p.m., roughly 25 minutes before the 8 p.m. curfew the city had imposed in the hopes of quelling the looting that had occurred over the weekend.

Armstrong also granted that he and Interim Police Chief Susan Manheimer need to review the video of that night more carefully as it appears there were indeed young people and the elderly in the crowd, though police initially said they received "intelligence" there was not.

And for the first time, Armstrong named the incident commander that night as Capt. Roland Holmgren.

KTVU has also formally asked Oakland police to review the video their officers took that night but has not yet been granted that request. A spokesman said that information "is still being compiled."

Armstrong's statements and tone were starkly different from what he and Manheimer told the public in two press conferences last week: That the crowd was violent, that people were "preparing Molotov cocktails," and that any type of tear gas deployment is administered only after a "careful" and "judicious" review, and only after a "high-level commander" approves it.

Upon being pressed by Oakland Police Commission Chair Regina Jackson, Armstrong said a report on the topic could be ready by July 15.

Armstrong's concessions came after about 50 people spoke at the special Oakland Police Commission virtual meeting, where community members called for defunding the police and ending the use of tear gas completely. A total of 500 people logged into the Zoom town hall.

The people who spoke were angry and frustrated. And they were ultimately fed up with the criminal justice system. Many simply just ended their two-minute statements by saying, "F--- the police."

"They lied and they should be dismissed," said Shawn Lee, who also urged the commission put an end to the use of all chemical agents.

Sometimes the conversation even swayed to another topic not on the agenda: The shooting death of Erik Salgado, 23, on Saturday, when California Highway Patrol officers fired more than 40 rounds into his car, sources said, killing him and injuring his pregnant girlfriend in the passenger seat. Sources told KTVU the shooting happened after officers believed Salgado was aiming a stolen Dodge Challenger at them. That vehicle is allegedly one of 74 vehicles stolen from San Leandro Dodge a couple of weekends ago.

Before the Zoom meeting started, John Alden, director of the citizen-led commission's investigative arm, said his agency received a total of 25 complaints stemming from 13 protest incidents since the protests began on May 29. That is a high number for his agency in such a short period, he added.

People all over the country have been demanding racial justice and for an end to police brutality since Floyd, an African-American man, was killed on Memorial Day when a white police officer sat on his neck for more than 8 minutes.

Since the tear gas had been deployed last week, an outpouring of witnesses has come forward, countering the police narrative that the crowd that evening following the youth rally at Oakland Tech had been violent.

Katharine Rad acknowledged she saw a single water bottle lobbed over the police barricade line shortly before the tear gas was deployed.

"Why are you doing that? Nobody did anything," Rad is heard shouting to officers on video she streamed on Facebook Live. "One person threw a bottle of water."

In Rad's video, police are seen putting on their facemasks at about 7:38 p.m. and then smoke and gas go off a few minutes later. Some kind of warning is announced over a loudspeaker, but it is not fully audible over the sound of the crowd.

Jennifer Li, 30, also said she saw a kid throw a water bottle and tear gas was launched in a matter of seconds. She was hit with a flash grenade and even now, more than a week later, her ear is still ringing and her back has bruises and injuries from the small grenade.

"I can't believe with all the weapons they have, they don't have a better sound system," Li said.

Emily Juneau recounted a similar scene, emphasizing she saw no violence or threat aimed at police that night before the gas was deployed.

She said there were indeed elderly people and children still at the protest, despite police saying there weren't.

"Stop gassing us!" she can be heard screaming into her cell phone. "There are kids in there."

Juneau then documents what happened by turning her camera on herself: "We are being gassed," she said breathlessly. "There was no violence."

Ester Kang was also in the crowd that evening.

Kang said she was hit hard by tear gas and flashbang explosions, which affected her greatly as she is recovering from a severe knee injury and could not get away fast enough.

At about 7:40 p.m. with no ample warning, Kang said she was "suddenly engulfed in tear gas." She said she saw many other people coughing and crying, too.

Kang's friend tried to help her get out, as she was using a cane, but her friend started to "choke so badly that they almost passed out and had to move faster than I was able to."

She said she would have happily left the scene if she had heard a clear announcement, or if it was past curfew. But none of that happened, she said.

Civil rights attorneys Jim Chanin and Rachel Lederman wrote the police chief a letter last week, accusing the department of violating the city's own crowd control policy and city law by unleashing tear gas and flash-bang grenades at peaceful protestors on May 29 and June 1.

Police, by law and court order, must use de-escalation techniques first, before deploying such harmful, although less-lethal, agents and tools, the lawyers said.

"This indiscriminate use of force may have been precipitated by a few individuals throwing water bottles and setting off fireworks," the lawyers said. "Yet this is exactly the type of challenging situation that the Oakland Police Department had in mind when it adopted the policy."

At the meeting, Lederman showed a picture of a woman's body covered with deep purple bruises from specialty impact munitions, which she said are not allowed to be used by Oakland police, especially when these projectiles and impact munitions are thrown into the crowd.

"We've obviously made a mistake allowing OPD to stock up on these weapons," Lederman said. 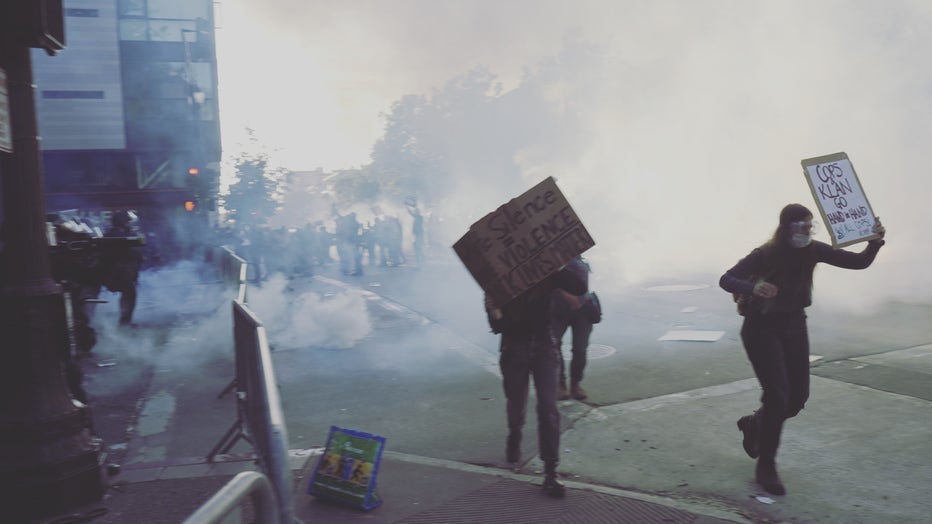 Protesters run away from getting tear gassed at an Oakland protest on June 2, 2020.