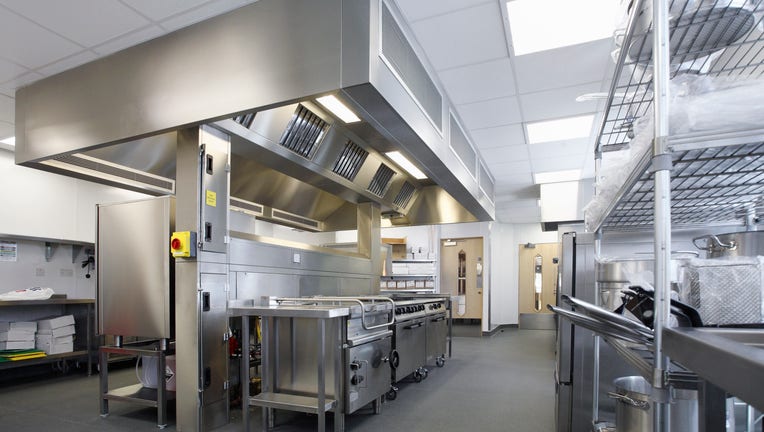 SAN LEANDRO, Calif. - The pandemic’s heavy toll on the restaurant industry can be seen in Jose Bonilla Jr.’s cavernous warehouse, which is packed with industrial ovens, grills, mixers, refrigerators, dining tables and chairs.

"We have an overflow of equipment that’s been coming in," said Bonilla, whose family started the company more than 40 years ago.

The COVID-19 pandemic has forced tens of thousands of restaurants to permanently shut their doors as dining restrictions keep customers away. But it has also been a boon for commercial auctioneers that buy used equipment and sell them to restaurants that managed to stay afloat, particularly ones that have expanded their takeout business and are eager to snatch up supplies at bargain prices.

"As the pandemic has continued to impact businesses, the auction industry has actually become busier and busier as the economy has weakened, especially in small businesses and in food service equipment," said John Schultz, a board member of the National Association of Auctioneers.

Schultz is the chief marketing and technology officer at Grafe Auction, a company based in Rochester, Minnesota, that helps restaurants and other businesses nationwide sell their used assets when they shut down.

"It’s a bittersweet thing for me as I see these businesses closing," Shultz said. "It’s sad for me, but for us it’s been actually a record year" in 2020.

A new report by the National Restaurant Association shows the pandemic’s devastating impact on the restaurant industry, which last year lost 110,000 businesses — about 17% of the nation’s total.

"We’ve never seen that kind of loss," said Sean Kennedy, executive vice president at the National Restaurant Association. "This is as dire a situation for the restaurant industry in this country as we’ve ever seen."

The National Restaurant Association is calling on Congress to help the country’s beleaguered restaurants as they negotiate a COVID-19 relief package with President Joe Biden.

"We need specific funding targeted at restaurants or the nation’s second largest private sector employer is not going to be around much longer," Kennedy said.

Over the past year, Bonilla’s been fielding a flurry calls from restaurants that are shutting down and need to quickly sell their equipment before the next rent check is due.

Unfortunately, Bonilla said, he can’t help most of these restaurant owners because his warehouse is already stuffed with roughly 2,000 pieces of equipment. And he doesn’t have enough workers to pick up, inspect and fix the used appliances.

"It’s heartbreaking because people, you know, they take their pride in the restaurants," Bonilla said. "They’ve put every resource they could possibly put into their business to try to survive, and they just cannot survive."

Among the hardest hit are restaurants that relied on indoor dining, especially in states that have imposed the most severe restrictions, industry officials say.

Before the pandemic, Johnny Metheny ran four restaurants in San Francisco, which has had some of the nation’s strictest rules on dining. He temporarily closed two downtown restaurants and permanently shut down a third, Solstice, because it didn’t have a good setup for outdoor dining.

"Unfortunately, I had to give the keys back there because after 10 months of not being able to operate, you just can’t survive," Metheny said. "We had 19 employees that unfortunately we had to lay off. And it’s devastating for them and it just crushes me."

Metheny tried to sell the restaurant’s equipment, but his friend who runs a commercial auction business declined to buy it because he already has too much inventory he can’t sell.

"He told me, ‘I’ve taken in so much equipment and nobody wants it.’ So we just put it in storage," said Metheny, who is considering opening a new restaurant when the pandemic ends.