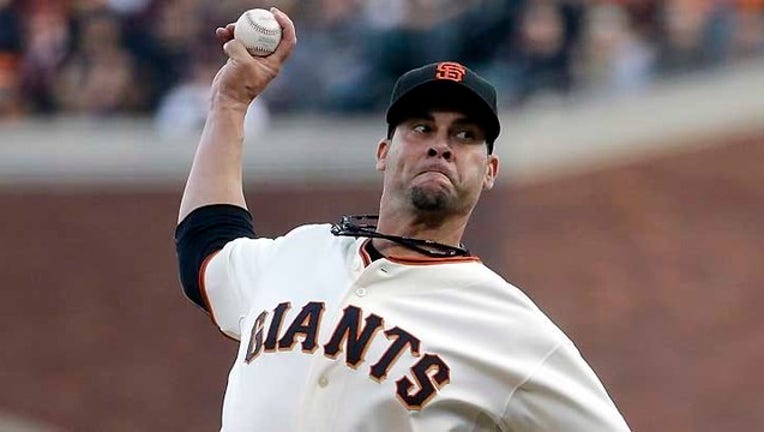 PHILADELPHIA (AP) — Joe Panik may soon find that where there are hits, there are votes.

Each game, the San Francisco second baseman continues to bolster his All-Star candidacy. His latest demonstration was a three-hit game on Sunday, in the Giants' series-ending 6-4 loss to the Philadelphia Phillies.

Panik, in his first full season, extended his career-best 12-game hitting streak with a third-inning double. In his last dozen games, he's batting .387 (19-for-49). He has reached safely in 20 consecutive games, the second-longest active streak in the majors, and his 18 extra-base hits are tied for third-most among NL second basemen.

"It's way too early for me to think about that," said Panik, who's batting .316 with four home runs, 22 RBIs and 29 runs. "Obviously, it would be a great honor. I've just tried to be consistent with my stroke and not try to do too much."

San Francisco promoted Panik last June, prior to their World Series run, and he's been a mainstay in their lineup ever since.

Panik and the Giants had a chance to sweep Philadelphia. Bochy said closer Santiago Casilla, who had pitched Friday and Saturday, was unavailable. That's why Bochy turned to Javier Lopez to face pinch-hitter Jeff Francoeur, when starter Ryan Vogelsong (4-4) was removed with two outs and two runners on in the seventh inning.

Francoeur followed with a two-run double to knock in two runs and snap the Phillies' three-game losing skid.

"It was a hard-fought series," Bochy said. "It was a change-up in (Francoeur's) wheelhouse. It's baseball. It's going to happen. You've got to give him credit. I gave (Lopez) a shot. He earned that."

Still, San Francisco pushed across a ninth-inning run against Philadelphia closer Jonathan Papelbon, and had the tying run in scoring position when Brandon Crawford struck out to end the game.

Right-hander Ken Giles (2-1) earned the victory with 1 2/3 innings of scoreless, hitless relief, and Papelbon picked up his 12th save in as many opportunities.

"We didn't get the runs we were hoping for at the end," Panik said. "We kept battling. We're always going to scratch and claw. Nothing is out of our reach."

The same could be said for Panik's first All-Star Game nod.

After the game, Philadelphia optioned RHP Severino Gonzalez to Triple AAA Lehigh Valley. The team did not announce a corresponding roster move.

Philadelphia SS Freddy Galvis ended a 0-for-31 slump with a seventh-inning single to right-center field. In the same inning, Galvis scored the winning run on Francoeur's double. The single was Galvis' first hit in eight games, dating to May 26.

Phillies: LF Darin Ruf drove his left shoulder into the wall while tracking down a flyout by San Francisco's Brandon Belt. Ruf remained in the game.

Giants: After an off day, San Francisco's second in five days, RHP Chris Heston (5-4, 4.29) gets the ball in Tuesday's opener of a three-game series in New York. Heston, who's never faced the Mets, has three wins in his last four decisions.

Phillies: LHP Cole Hamels (5-4, 2.88) starts for the Phillies on Monday in Cincinnati, opening an eight-game roadtrip. Philadelphia has earned wins in five of the last six starts by Hamels, who entered Sunday leading the NL with 81 1/3 innings.