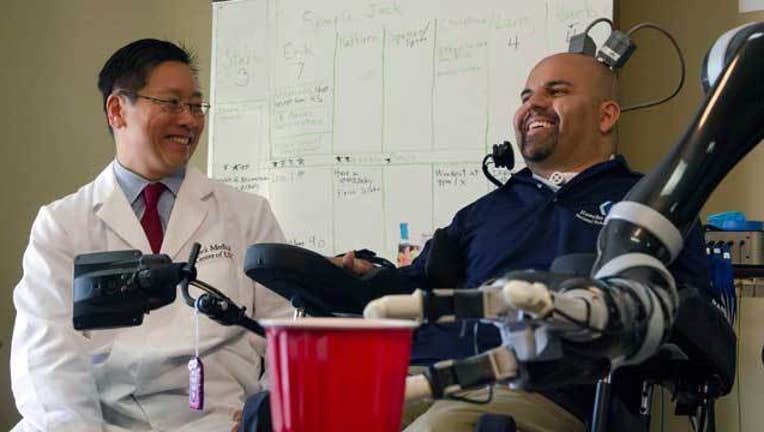 LOS ANGELES (AP) — A man paralyzed by gunshot more than a decade ago can shake hands, drink beer and play "rock, paper, scissors" by controlling a robotic arm with his thoughts, researchers reported.

Two years ago, doctors in California implanted a pair of tiny chips into the brain of Erik Sorto that decoded his thoughts to move the free-standing robotic arm. The 34-year-old has been working with researchers and occupational therapists to practice and fine-tune his movements.

It's the latest attempt at creating mind-controlled prosthetics to help disabled people gain more independence. In the last decade, several people outfitted with brain implants have used their minds to control a computer cursor or steer prosthetic limbs.

Here are some things to know about the new work, published Thursday by the journal Science:

Doctors at the University of Southern California implanted small chips into Sorto's brain during a five-hour surgery in 2013. The sensors recorded the electrical activity of about 100 brain cells as Sorto imagined reaching and grasping.

Researchers asked Sorto to think about what he wanted to do instead of breaking down the steps of the movements, said principal investigator Richard Andersen at the California Institute of Technology.

After weeks of imagining movements, Sorto trained with Caltech scientists and therapists at Rancho Los Amigos National Rehabilitation Center to move the robotic arm, starting with a handshake and graduating to more complicated tasks. The sensors relayed their signals to the arm, bypassing Sorto's damaged spinal cord.

Scientists have long strived to make robotic arms produce movements that are as natural as possible. Previous research targeted a region of the brain known as the motor cortex, which controls movement.

The new work zeroed in on a different area of the brain — the posterior parietal cortex — that's involved in the planning of movements. The hope is that this strategy will lead to smoother motions.

It's unclear whether the new approach is better because no side-by-side comparisons have been made yet, but it gives researchers a potential new target in the brain.

In 2012, a Massachusetts woman paralyzed for 15 years directed a robotic arm to pick up a bottle of coffee and bring it to her lips. In another instance, a quadriplegic man in Pennsylvania used a robotic arm to give a high-five and stroke his girlfriend's hand.

Sorto has a caregiver at home, but he goes to the rehab center several times a week to practice using the robotic arm.

Since suffering a gunshot wound 13 years ago, he longed to drink a beer without help. The first time he tried with the prosthetic arm, he was so excited that he lost his concentration and caused the arm to spill the drink. On the second try, he directed the arm to pick up the bottle and bring it to his mouth where he sipped through a straw.

The beer tasted "like a little piece of heaven," Sorto said.

Despite progress in the last decade, hurdles remain before brain-controlled prosthetics can help paralyzed people in their daily lives.

Experts said computer programs must run faster to interpret brain signals and the brain implants must be more durable.

Currently, wire connections run from a patient's brain to outside the skull, increasing the risk of infections. Future systems need to be wireless and contained within the body like pacemakers, experts J. Andrew Pruszynski of Western University in Canada and Jorn Diedrichsen of University College London wrote in an accompanying editorial.