Portions of Santa Clara County, including San Jose's Alum Rock neighborhood, are expected to go dark sometime Wednesday night or early Thursday morning. KTVU's Azenith Smith talked to residents about the potential PG&amp;E blackout and winds that have not yet materialized.

SAN JOSE, Calif. - Power your electronic devices and cellphones and fill up those gas tanks. The South Bay could be in for a rough ride. That was the gist of the message at Wednesday's afternoon news conference on the PG&E power shutoffs held by San Jose city officials. 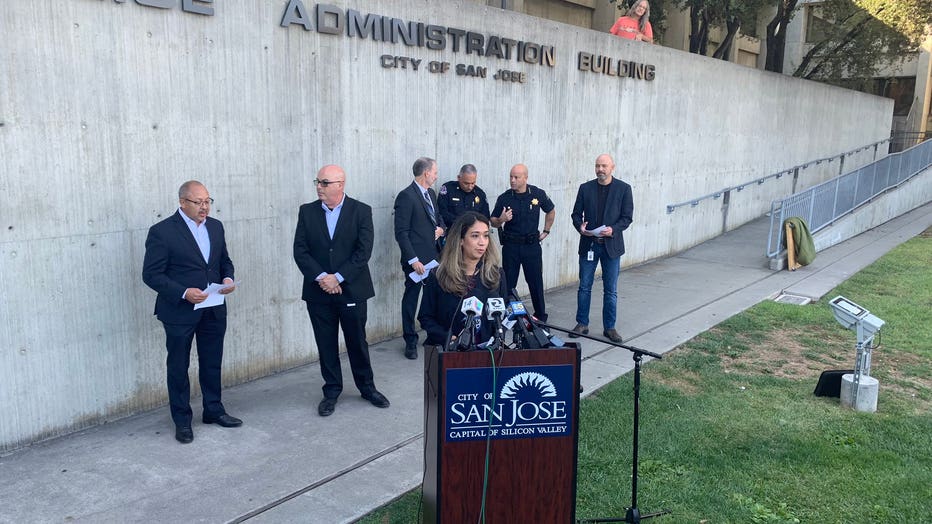 San Jose city officials give an update on the power shutoffs.

The changing weather conditions prompted delays of the much-talked about PG&E Public Safety Power Shutoff. But around 10:30 p.m. on Wednesday, the outages began in the South and East Bay as well as Santa Cruz County. PG&E issued an update saying the shutoffs were expected to continue through midnight.

Initially scheduled for Santa Clara County at noon, the outages were then set to go into effect Wednesday at 8 p.m., due to Red Flag Warning conditions, but were delayed again.

Santa Clara County officials declared a state of emergency on Wednesday. Officials said 38,200 PG&E customers throughout the county will be affected. About 1,100 of which are customers with special energy needs due to medical conditions.

Outreach to critical medical facilities continues where people are most at-risk. Flyers were printed in multiple languages, including Spanish and Vietnamese.

The state of emergency will remain in effect until county officials will be able to determine power has fully been restored. The city has reached out to 29 senior centers in the area and had plans to reach out to all of them during the emergency.

San Jose city officials reminded residents to plan ahead because the outages could last up to seven days. Don't drive if you can avoid it and treat intersections where traffic lights are out as four-way stops, officials advised. You should have flashlights, batteries and battery-powered radios on hand.

San Jose city manager David Sykes said three city-operated resource centers have opened where residents can get water, snacks, and charge their electrical devices. The centers will be open from 8 a.m. to 8 p.m. every day while the outages are in effect. Staffers said they have emergency generators, which can power a 3,000 square-foot portion of the facility if the power is out as expected.

There are also 11 community centers open to assist those affected.

In addition, PG&E has a community resource center at Avaya Stadium, located at 1145 Coleman Ave. in Santa Clara, that will serve the same function and will have the same hours.

The city manager reminds residents to only call 911 in case of emergency and not for information about the outages.

They do not anticipate drinking water, sewer systems, and wastewater treatment systems will be affected. Residents are asked to conserve water and turn off outdoor water irrigation.

“Garbage and recycling in affected areas should still be picked up, although it could be a little later than normal if traffic conditions are bad if signals are still out,” said Sykes.

Deputy City Manager Kip Harkness said the delay in the outages would provide an opportunity for the evening commute to go smoothly, but encouraged people to get home by 8 p.m. if at all possible.

“If you’re not able to get home by then, be patient because it’s going to be a long, slow commute,” said Harkness.

So far Alum Rock School District has made the decision to close its 19 schools for Wednesday and Thursday, affecting 9,000 students. Evergreen Valley College closed its campus Wednesday until further notice.

Valley Transit Authority said light rail service will not be impacted by the shutoffs. However, bus routes servicing the Eastridge Transit Center could be delayed due to traffic signals that have lost power.

Officials said PG&E have been conducting groundwork and outreach to medical baseline customers.

“Be compassionate and kind toward them. Help them and allow them to move freely in the city to do our work,” Harkness said. “They are our partners in restoring power.”

At a separate PG&E news conference Wednesday night in San Francisco, company Vice President Sumeet Singh, said the utility has 45 helicopter crews ready to conduct inspections. As many as 6,300 personnel are working on the ground.

A PG&E worker in Colusa Co. was reportedly shot at on Tuesday evening.

SJPD Chief Eddie Garcia advised the department would not have the bandwidth for a presence at all major intersections.

“We do want people to harken back to their driver’s license tests,” for when they approach a traffic light with no signal. “Treat it as a stop sign or a four-way stop,” Garcia said.

The San Jose Fire Department weighed in during the news conference with perhaps some obvious advice that there should be no open flames or use of tools in dry areas due to potentially volatile conditions.

The impending loss of electric service is weighing heavily on the minds of residents.

“I worry about my family. I have my sister, my neighbor. They need to have (their) medication in the refrigerator for, you know insulin. And how much longer, how long is it going to be?,” said East San Jose resident Gloria Lechuga.

John Heerey doesn't know how he will sleep through the night. He relies on a CPAP machine to breathe for his sleep apnea. Without power, it won't work.

“I’m very anxious,” said Heerey. “We don't know what to do because we have never been through this situation before.”

Heerey has stocked up on battery-operated flashlights and his fridge is filled with water and Gatorade.

“I will possibly go to a hotel or stay with family, we can't live that many days without light,” said Heerey.

Heerey doesn't buy the reasoning behind the utility's plan.

The two impacted areas are East San Jose close to the foothills, and in the Almaden Valley section of the city near the Santa Cruz Mountains.

In Morgan Hill, there's a pedestrian curfew in affected areas starting at 8 p.m.