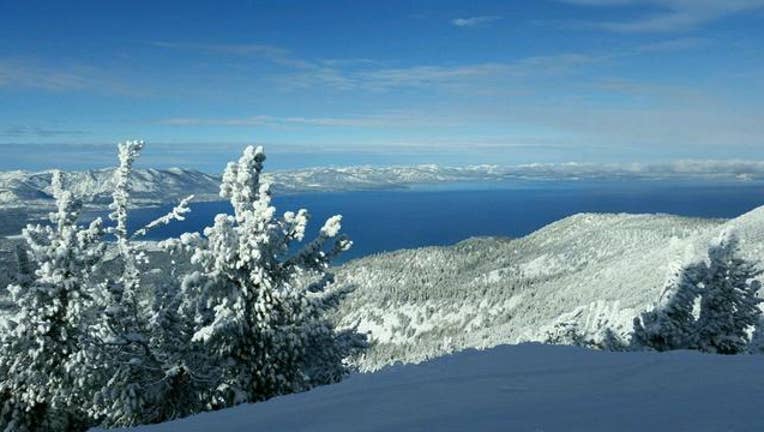 A series of storms that doused the state in the first two months of the year brought the water content of the snowpack up to a "pretty phenomenal" 185 percent of normal, well above the 84 percent of normal a year ago, said Frank Gehrke, the state's chief snow surveyor.

Winter snowfall on the 400-mile mountain range provides roughly one-third of the water used in the nation's most populous state as the snow melts over the spring and summer and fills reservoirs supplying farmers and city dwellers.

Gehrke said the snowpack is nearing levels last seen in 1983. He noted that levels reached by April 1 are a key marker because that's the typical end to the wet season.

"We've busted through April 1 values pretty much at all snow courses throughout the state," Gehrke said.

Gehrke took a manual measurement under clear blue skies Wednesday in a meadow at Phillips Station near Lake Tahoe. He found 10 feet of snow at a spot that had been bare of snow at the height of the drought.

Nearby road signs stood half-covered in snow, and roof peaks of homes sat nestled in deep snow with tunnels dug out for access to front doors.

At the southern end of the Sierra Nevada - with the highest mountain peaks - more than double the normal amount of snow has piled up.

The deluge follows five years of drought, including two of the driest in the state's recorded history.

In April 2015, Gov. Jerry Brown attended the monthly snowpack survey near Lake Tahoe, standing in a field that was barren of any measureable snow.

Brown later ordered residents to use less water at home - a first for California. In the state that leads the nation in producing fruits, vegetables and nuts, some farmers drew down wells to grow their crops; others left fields unplanted.

The bleak scenario began to ease last year. In recent weeks, heavy storms flooded some areas of California. For a time, officials feared Oroville Dam, the nation's tallest, could burst. Tens of thousands of people were evacuated.

The snow, however, has been good news for skiers.

At Mammoth Mountain, a popular destination in Southern California, more than 43 feet of snow has fallen. Resort spokeswoman Lauren Burke said the venue plans to stay open through Independence Day.

Farther north, Lake Tahoe is at its highest level in more than a decade and ski resorts are extending the season to the end of April.

"We've had days when we had to take a little extra time to dig out we've had so much snow," said Marcie Bradley, a spokeswoman for Northstar California. "It's been an incredible snow year."