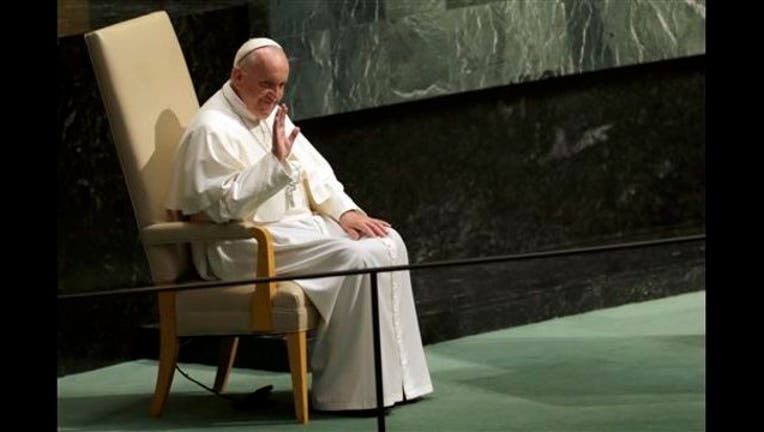 Pope Francis waves at the audience while sitting in the head of state chair after addressing the 70th session of the United Nations General Assembly, Friday, Sept. 25, 2015 at United Nations headquarters. (AP Photo/Mary Altaffer)

NEW YORK (AP) — Pope Francis declared Friday that the environment itself has rights and that mankind has no authority to abuse them, telling world leaders at the United Nations that they must take urgent action to halt the Earth's destruction from the "selfish and boundless thirst" for money.

Hoping to spur concrete commitments at upcoming climate change negotiations in Paris, Francis took the stage in front of more than 100 global dignitaries to accuse the world's wealthy countries of ravaging the planet and impoverishing the weak and disadvantaged in the process.

He also asserted that the poor have inherent rights to education and what he has termed the "three L's" — lodging, labor and land.

Francis' speech, the fifth by a pope to the U.N., was a distillation of his recent teaching document on climate change, which has delighted liberals and environmentalists and drawn scorn from big business interests.

By bringing the document to life before the U.N., Francis made clear his priorities.

Francis' speech kicked off a whirlwind day in New York that was expected to blend the powerful and the poor, from the solemnity of ground zero to the struggles of East Harlem.

His schedule included events as large as a processional drive through Central Park, as personal as meetings with East Harlem schoolchildren and immigrants, and as inspiring for the faithful as Mass for 18,000 at Madison Square Garden.

At ground zero, Francis paid tribute to the victims of the Sept. 11 attacks, standing in silent prayer before the two reflecting pools that mark the footprints of the fallen twin towers.

With just the gentle splashes of water piercing the silence, he lay a white rose on the pools' edge, inscribed with the names of the 3,000 people killed in the 9/11 attacks. He also met with relatives of the victims.

Francis was greeted on his arrival at the U.N. by Secretary-General Ban Ki-moon, a key supporter of his eco-friendly agenda. In his opening remarks, Ban praised Francis for his moral leadership.

"You are at home not in palaces, but among the poor; not with the famous, but with the forgotten; not in official portraits, but in 'selfies' with young people," he said.

Among those in the audience for Francis' speech was Nobel peace laureate Malala Yousefzai, the young Pakistani education campaigner who was shot and gravely wounded by the Taliban. She will be addressing the U.N. summit later. Also on hand were German Chancellor Angela Merkel and Bill and Melinda Gates.

While his visit marked the fifth time a pope has addressed the United Nations, the Vatican flag was raised for the first time just before Francis' arrival. The General Assembly recently agreed to allow the U.N.'s two observer states, the Holy See and Palestine, to fly their flags alongside those of the 193 member states.

Speaking in the packed General Assembly hall, Francis declared that "a right of the environment" exists.

He said the universe is the result of a "loving decision by the creator, who permits man respectfully to use creation for the good of his fellow men and for the glory of the creator: He is not authorized to abuse it, much less destroy it."

He said a "selfish and boundless thirst for power and material prosperity leads both to the misuse of available natural resources and to the exclusion of the weak and disadvantaged."

Francis called for immediate access for the world's poor to adequate food, water and housing, as well as religious freedom.

He drew applause when he called for a reform of the U.N. system and international financial agencies to give poor countries a greater say.

That, he said, would ensure that they aren't subjected to "oppressive lending systems, which, far from promoting progress, subject people to mechanisms which generate greater poverty, exclusion and dependence."

Francis also made clear that he firmly upholds the church's unchanging doctrine on life issues: He called for the "absolute respect for life in all its stages" — including the unborn. He cited "moral law written in nature itself" in insisting there is a natural difference between men and women. The Catholic Church has been on a campaign to denounce "gender theory" and the idea that people can choose their sex.

And he repeated his denunciation of the "ideological colonization" of the developing world — a reference to how Western ideas about contraception and gay rights are often imposed on poor nations as a condition for development aid.

Conservative Catholics have criticized Francis for not focusing more on the anti-abortion position of the church, and they have complained in particular that by adopting the U.N.'s environment agenda the church is compromising its stand on key life issues.

Francis arrived in the United States from Cuba insisting that he isn't a leftist, and that his message is perfectly in keeping with the Catholic Church's social teaching. But conservatives have bristled at his anti-big business message, noting that capitalism has lifted millions of people out of poverty.

Francis' call for a world free of nuclear weapons drew applause from across the General Assembly — including Iranian Foreign Minister Mohammad Javad Zarif.

The pope praised the recent Iranian nuclear deal, but lamented that conflicts are raging elsewhere, and that Christians and religious minorities in particular are being targeted.

Francis wraps up his U.S. visit this weekend in Philadelphia, where he speaks in front of Independence Hall and celebrates Mass on the Benjamin Franklin Parkway to close out a big rally on Catholic families.