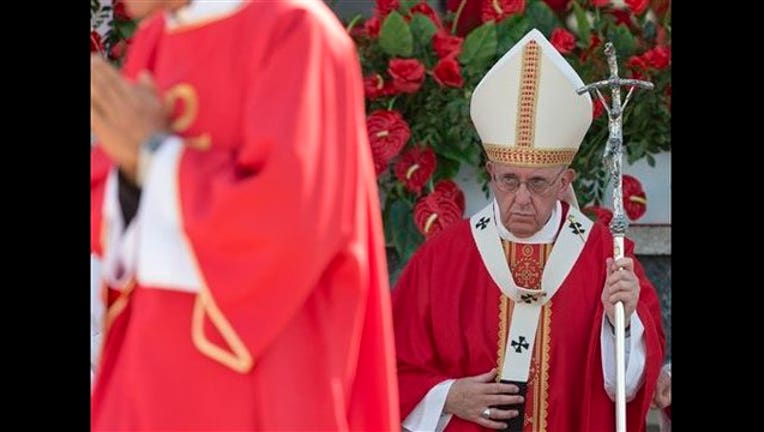 Pope Francis approaches the altar with his pastoral staff to celebrate Mass at the Plaza of the Revolution, in Holguin, Cuba, Monday, Sept. 21, 2015. (AP Photo/Alessandra Tarantino)

SANTIAGO, Cuba (AP) — Pope Francis marked the anniversary Monday of the day he decided as a teenager to become a priest by pressing a subtle message to Cubans at a delicate point in their own history: Overcome ideological preconceptions and be willing to change.

Francis traveled to Cuba's fourth-largest city, Holguin, and celebrated a Mass where Cuban rhythms mixed with church hymns under a scorching tropical sun.

Later in the day, he flew to Santiago for an evening visit to the shrine of Cuba's patron saint, and on Tuesday he will arrive in Washington for the U.S. leg of his first visit to the two former Cold War enemies.

Singing children and a small crowd waving Cuban and Vatican flags greeted Francis on his arrival, some crying out, "Francis! Holguin is with you!" Holguin's Plaza of the Revolution was packed with an estimated 150,000 people for the Mass, many dressed in white to protect them from the sun.

Security agents didn't appear to be letting members of the crowd get too close to him. On Sunday, an apparent dissident hung on to the popemobile in Havana and seemed to be appealing to the pontiff before the man was dragged away.

In his homily in Holguin, a city of about 300,000, Francis pressed some of the subtle themes he has developed during this balancing act of a Cuban visit. He told the crowd of how Jesus picked a lowly and despised tax collector, Matthew, and instructed him without casting judgment to follow him. That act of mercy changed Matthew forever.

Francis told the Cubans that they, too, should allow themselves "to slowly overcome our preconceptions and our reluctance to think that others, much less ourselves, can change."

It was a theme Francis sketched out Sunday night in an off-the-cuff encounter with young people. He encouraged them to dream big about what their life could be like, and not be "boxed in" by ideologies or preconceptions about others.

"If you are different than me, why don't we talk?" Francis asked the crowd. "Why do we always throw rocks at that which separates us?"

The message comes at a delicate moment of change on the island. Cuba and the U.S. re-established diplomatic relations this year in a move Francis helped broker, and the communist country is undertaking modest free-market reforms that have opened some sectors of the economy to private enterprise.

Detente with the United States has raised hopes on both sides of the Florida Straits that the millions of families divided by the 1959 Cuban revolution will be reunited.

As a result, Francis has emphasized themes of reconciliation and looking beyond prejudice and ideologies.

"Francis is looking for peace among peoples and countries," said Yordani Monteagudo, a 24-year-old government worker who recorded Francis' encounter with young people Sunday night and was still talking about it a day later. "In his message he called on young people to not be afraid to dream. This makes you want to live, and build up this country."

Francis' homily also reflected a very personal story of his own faith and willingness to embrace change.

On Sept. 21, 1953 — 62 years ago Monday — a 17-year-old Jorge Mario Bergoglio went to confession at his parish church in Buenos Aires. During the confession, he later wrote, he "realized God was waiting for me," and knew he was going to become a priest.

Bergoglio wouldn't enter the seminary for several more years, but Sept. 21 — the feast of St. Matthew — has remained a crucial reference point for the pope. His episcopal motto — Miserando atque eligendo (Having had mercy, he called him) — is inspired by the feast day and the story of Matthew, a sinner who was looked upon with mercy by Jesus and was changed forever.

"This Gospel of St. Matthew, this experience of Jesus who looks him in the eye and calls him to conversion to follow him, is something that is absolutely fundamental to the spirituality and life of the pope," said the Vatican spokesman, the Rev. Federico Lombardi. "It is something that is at the root of Bergoglio's religious vocation."

After arriving in Santiago, the pope went to the Sanctuary of the Virgin of Charity of Cobre, the home of the venerated icon of Cuba's patron saint. After laying a bouquet at the feet of the foot-tall wooden statue, Francis made the sign of the cross and prayed, sitting and silent, for about 10 minutes. He then stood and recited a prayer.

Francis appeared to be in some discomfort walking; he has needed extra help getting up and down stairs during this trip, and the Vatican spokesman acknowledged Monday that the pontiff wasn't moving around well. Francis suffers from sciatica and has a bad knee.

This story has been corrected to show that Holguin is Cuba's fourth-largest city, not the third-largest.