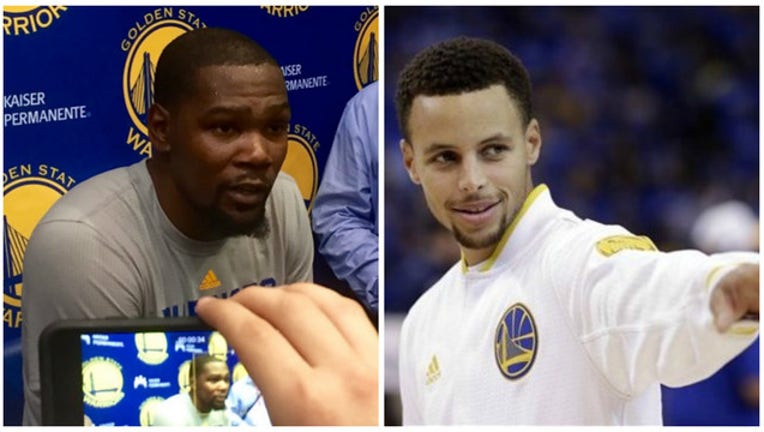 OAKLAND, Calif. (AP) — Zaza Pachulia holds his own during competitive games of poker on the airplane alongside Stephen Curry and Klay Thompson — they call it the "Good Guys Table." Andre Iguodala and JaVale McGee, one-time teammates with Denver reunited in Oakland, hold secret chats.

"It depends how Klay feels. If he's tired, then no card game," Pachulia said.

With all that was made before the season about adding Kevin Durant to an already star-studded roster, Golden State's players have jelled just fine. The NBA-best Warriors (47-9) are gearing up for the second half and what they hope is another championship run, and chemistry sure isn't holding them back.

Two-time reigning MVP Curry and KD love to watch each other accomplish amazing things on the floor, along with Draymond Green and Thompson and all of the others who contribute off the bench.

Curry initially allowed Durant to find his groove, then began to assert himself more and increase his shots. Experience playing together is the biggest factor to keep building team bonds, if you ask Iguodala.

"Weathering storms builds chemistry and adversity builds chemistry," he said. "The season's long and you want to have all types of ups and downs. And that's where you build it the most, and off the court, plane rides. I think when you play with teammates seven, eight years, you're still building throughout that time. You continue to learn about each other. You've just got to understand that that's part of the process and you've got to want to learn from one another."

The Warriors are counting on every advantage they can gain, on and off the court. During flights, team dinners, anywhere.

After a heartbreaking Game 7 to end last season's NBA Finals, Golden State's players want nothing short of a championship. Many of them got a taste winning the title two years ago for the franchise's first in 40 years.

Steve Kerr, the reigning NBA Coach of the Year, gets a kick out of watching his teams come together each year.

"It's one of my favorite parts of coaching honestly, is seeing how a team comes together, seeing the relationships develop, seeing guys laughing together, seeing who hangs out with who," Kerr said. "It's great. This team has a really, really good chemistry that developed really quickly. Obviously, we had the core group intact from last year. We lost some key guys, too. The additions have been great. The chemistry is really good."

Pachulia took it upon himself to be a part of that. With constant attention on the Warriors, he knows the importance of sticking together through all of the many challenges that come in an 82-game season — and those things prepare a group for the postseason.

"You wish for the chemistry to come right away because you're kind of feeling pressure, a lot of talk's going on from outside," Pachulia said. "The reality is it's a process. It takes some days, it takes some games. It takes some bumps as well for the team to get on the same page and get the chemistry right. You've got to go through the process. I just don't see it the other way. We couldn't wait for these 40 or 50 games to pass and see where we were going to be. I feel really confident where we are right now, with everything we had throughout this 50 games, even the losses we had unexpected. It made us better, it made us stronger. You can appreciate it, honestly. We care about each other. We're on the same page. Keep going. We're not going to stop."

For Iguodala and McGee, the "chatter" stays between them.

"I have a lot of really in-depth conversations with JaVale McGee," Iguodala said, "about life."