MILL VALLEY, Calif. - An independent audit of the Mill Valley School District’s credit cards that included a limo ride, food on the Sonoma Coast, and hotel charges, found no evidence of fraud, but did issue policy recommendations to protect against potential waste and abuse in the future.

A review of expenses was immediately ordered by the board in February following a KTVU investigation into district spending. The board hired Eide Bailly LLP at a cost of roughly $5,000, records show.

Thousands of dollars in meals, hotels, gifts, and trips charged to school credit cards were initially discovered by a group of parents that campaigned against the board and several superintendents in recent years out of fear taxpayers’ money and district funding was being abused.

KTVU reviewed Mill Valley School District receipts and statements from 2014 to 2019, finding questionable expenses including a hot air balloon ride in wine country, a yacht charter on the San Francisco Bay, and a trip to a ski resort near Lake Tahoe.

The district maintains those expenses were paid for through anonymous donations, however, no documentation showing credit card reimbursements for those specific charges was provided to KTVU.

Other receipts and statements show thousands of dollars spent annually at restaurants and stores. This new, outside review did not flag any of those charges.

"We utilized common forensic accounting methodologies to search for questionable credit card charges by examining the vendor names, frequency and amounts," the audit said. "And examining supporting documentation to further understand the business nature of each charge."

The audit covers the three most recent fiscal years, including 846 transactions. It did question missing receipts, a luxury transportation ride, training costs and even a Netflix subscription.

After auditors reviewed pictures from events, receipts or certificates, and proof of a reimbursement, the charges were deemed legitimate.

"We take allegations of wrongdoing very seriously in our district," Superintendent Kimberly Berman said. "We are committed to inspecting our practices and continually improving." 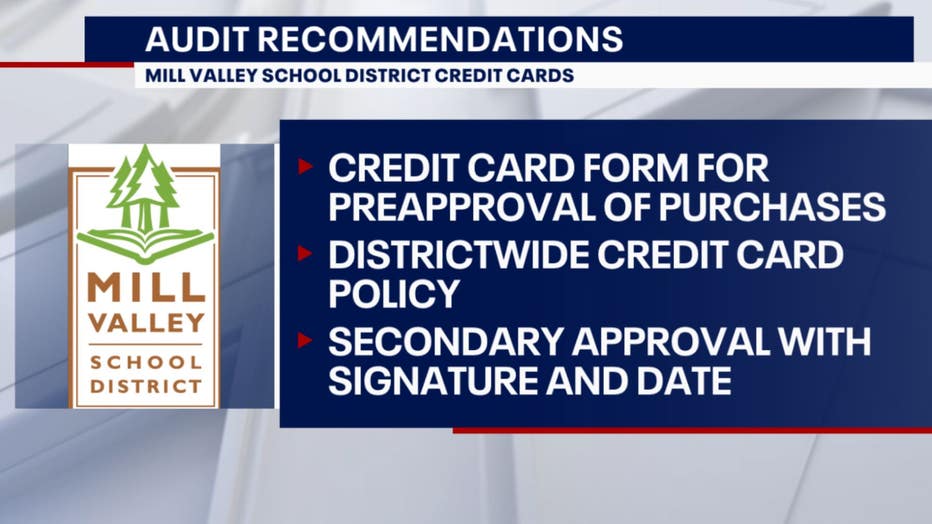 First, they recommend the district create a form for pre-approval of credit card purchases, rather than doing it verbally.

Second, auditors say the district lacks a credit card policy and should develop one to prevent employees misusing credit cards.

Finally, the report stresses the importance of a secondary person signing off on charges and including an approval date to help track what has been approved and when.

"We will implement recommendations that provide additional layers of protection in our district and continue to avoid potential fraud in the future," she said.

The board is expected to approve the 38-page report during its meeting Thursday night.