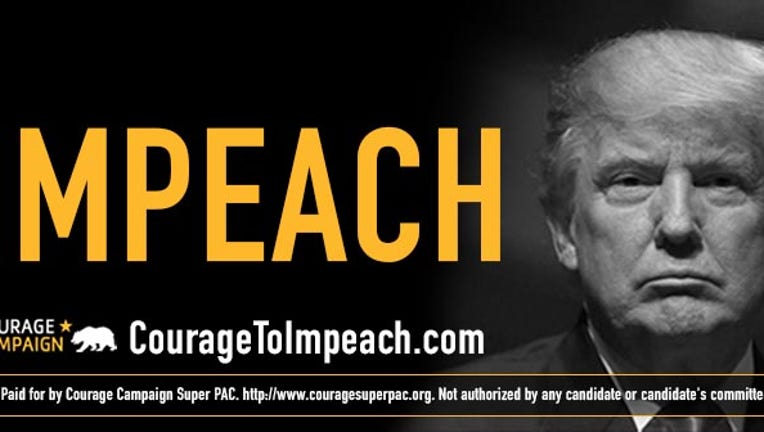 SAN FRANCISCO - As tourists flock to Fisherman’s Wharf to scout out sea lions and buy a bowl of clam chowder, they’re also going to get a visual taste of a stern-faced President Trump beaming down from a new billboard.

On Tuesday, the progressive Courage Campaign, which was behind a similar billboard in 2017, started paying for the larger-than-life signage to be placed at Mason and Jefferson streets through Oct. 21.

The billboard reads “IMPEACH” and leads viewers to the website, CouragetoImpeach.com. The impeach message also shared its blinking display with an Applebee's Vampire special and was placed next to a "Will You Survive Alcatraz?" billboard.

The backdrop of the new billboard campaign comes as House Democrats launch a new phase of their impeachment inquiry and as former Ambassador Kurt Volker, until recently a top State Department representative to Ukraine, is scheduled to meet with investigators.

“Now, after using his position as President to blackmail Ukrainian leaders to manufacture political dirt on the Biden family, the case for the impeachment of Donald Trump on legal grounds is a no-brainer,” Eddie Kurtz, executive director of Courage Campaign, said in a statement. “Our national nightmare must end. Trump must be impeached now.”

Not surprisingly, Republicans didn’t like the message or the platform.

“This is a classic example of preaching to the choir, in one of the most liberal congressional districts in America,” Harmeet Dhillon, a San Francisco attorney and National Committeewoman of the Republican National Committee for California, said in an email to KTVU on Wednesday. “Nancy Pelosi is not likely to be impacted by a billboard in a part of town she hardly visits, and her vote is really the only relevant vote in the House on impeachment. Mrs. Pelosi is standing firm in the fake “inquiry” her party wishes to pursue rather than a politically disastrous impeachment in the House.”

Dhillon added that the United States doesn’t decide constitutional issues by advertising campaigns, billboards, and outlier districts. “Partisan impeachment efforts, even in Congress -- not the Marina district --  always fail, and this one will be no different,” she said.

The billboard reads “IMPEACH” and leads viewers to its website, CouragetoImpeach.com. The display shared a blinking message with an Applebee's Vampire special. Oct. 16, 2019

The billboard is being paid for through donations made by Californians who stand with the Courage Campaign.