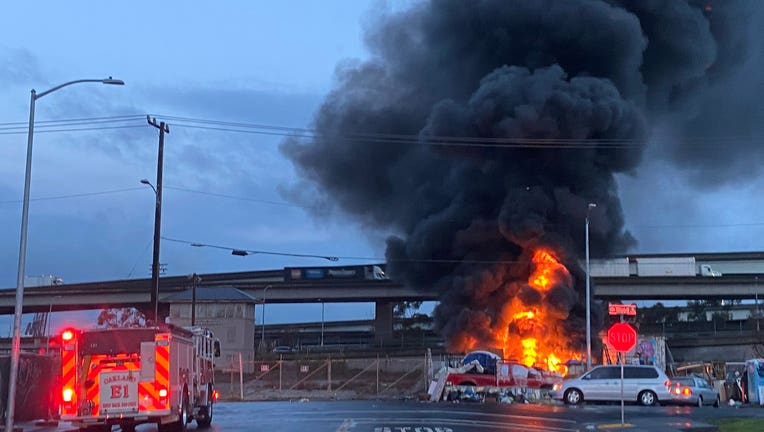 OAKLAND, Calif. - Multiple living quarters were involved in a fire at a homeless camp Wednesday morning in Oakland, in at least the second fire at a camp in two days, fire officials said.

The fire was reported as a recreational vehicle fire at 6:15 a.m. at 18th and Wood streets in West Oakland near Interstate Highway 880.

When crews were there, at least one propane tank exploded, according to fire officials. Everyone escaped injury.

"Like many fire departments around the state, it's very common for Oakland Firefighters to find an array of ignition sources including propane tanks at encampment fires," said Michael Hunt, chief of staff with the Oakland Fire Department.

"Today was no different," he said. "A malfunctioning propane tank, especially one that has been in close contact with a continuous flame or other ignition sources, can explode and cause severe safety risks for those nearby and firefighters on scene."

An encampment fire Tuesday morning around the same time occurred at East 12th Street and 17th Avenue in East Oakland, according to fire officials.

Tuesday and Wednesday mornings' fires are two of a growing number of encampment fires in Oakland.

"We continue to see that number grow year to year," Hunt said.

The fires are all over and not just in one, two or three locations, Hunt added.

The causes of Tuesday's and Wednesday's fires are under investigation, he said.