Oakland businesses are boarding up ahead of Friday night protests

A demonstration is set to take place at 8 p.m. at Frank Ogawa Plaza following the police killing of Daunte Wright in Brooklyn Center, Minn on April 11.

Demonstrators gathered at Frank Ogawa Plaza, unofficially dubbed Oscar Grant Plaza, at 8 p.m. for an hour before they began to march through the streets where they chanted for Daunte Wright.

Wright, 20, was shot and killed last Sunday by an officer with the Brooklyn Center, Minn. police department during a traffic stop.

Kimberly Potter, who has since resigned from the department, said she mistakenly grabbed her gun instead of her Taser. She has since been arrested on second-degree manslaughter charges.

The protest began peacefully in the plaza, where people expressed their anger and sorrow for so many police killings. The shootings have reignited the national conversation about policing and use of force.

"Cold-blooded. I'm traumatized. I realize that we can't just sit back and keep allowing this to happen," said Xochitl Johnson of Oakland.

As groups splintered off and the night wore on, the activity devolved into vandalism in some areas. A Target store at 26th and Broadway was vandalized and had broken windows.

As police arrived, they kept their distance at first. By 11 p.m. police on loudspeakers declared the group of about 200, an unlawful assembly. There was no word on arrests.

There were smashed windshields and cars on fire at a nearby Honda dealership. A small fire was set outside a bank. These were some of the same businesses that saw vandalism last summer during the George Floyd protests.

Downtown Oakland business owners boarded up their property Friday in anticipation of a demonstration against police shootings of Black men. Hundreds of people gathered at Frank Ogawa Plaza to express their anger and sorrow over the recent fatal shootings across the country.

Businesses in downtown Oakland anticipated some of this activity. Shortly before 5 p.m., a KTVU crew spotted workers boarding up businesses in the area of 14th and Broadway streets. Oakland Police headquarters was blocked and barricaded as a precaution. The Oakland Federal buildling was also fenced off with barricades.

"While one police officer is on trial, another police officer is killing another Black man," said Chris Rachal, owner of Liege Spirits Lounge. He boarded his downtown business up. "I'm okay with closing. I can close up for the rest of the year. Really, to tell you the truth, I'm fed up."

Rachal said he sees it from both sides. He worries about family and friends and they worry about him, but he also has friends on the Oakland Police Department. "It's tough on them too," he said. 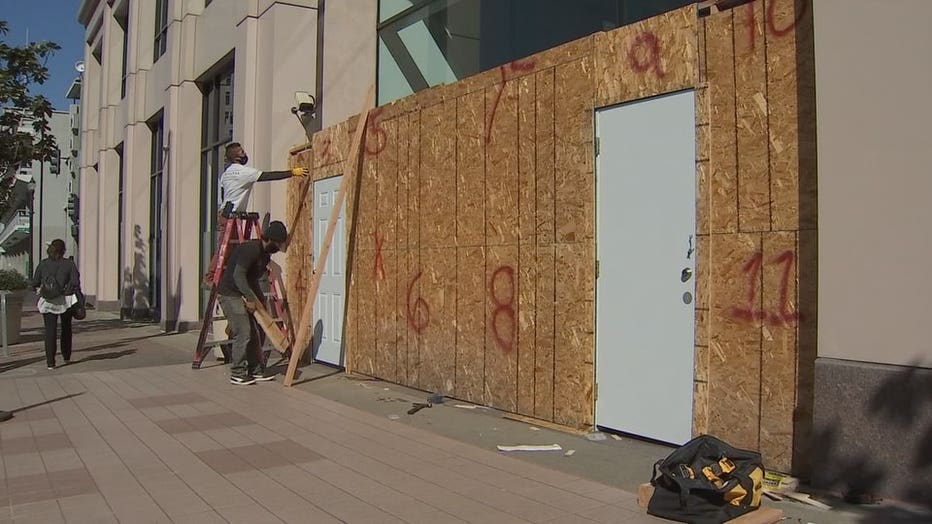 "I'm angry. I'm angry, but I'm focused," said J.T. Faraji with the Hood Squad. "I'm focused on bringing an end to what's happening, what this system is allowing." 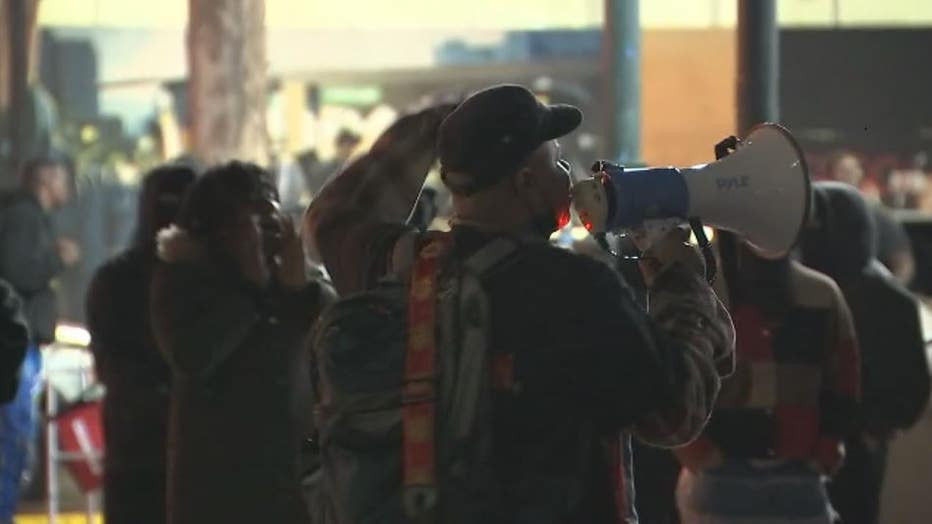