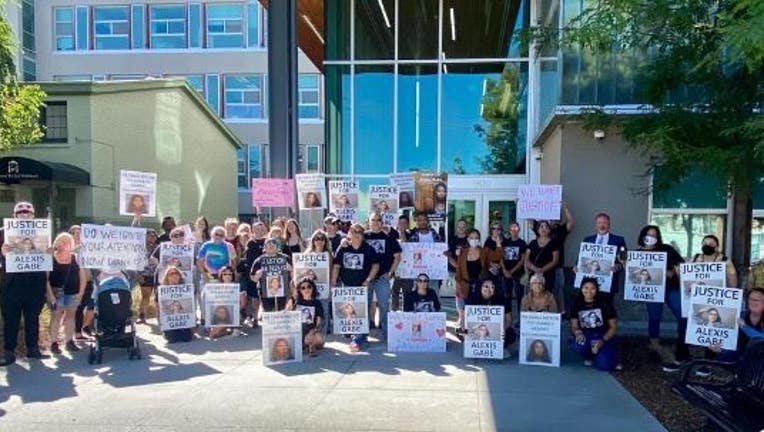 OAKLEY, Calif. - The family of Alexis Gabe has announced a new approach to finding their daughter's remains: a race to get the $100,000 reward.

In a new website dedicated to bringing her home, the family said the reward is now being offered by Oakley city officials to anyone who can find her body.

"$100,000 is yours if you find Alexis' remains," said her father, Gwyn Gabe. He said after months of denying and hoping, the family has come to terms that their 'only daughter is gone.'

The 24-year-old Oakley woman is believed to have been killed by her boyfriend, Marshall Jones, on Jan. 26. When police tried to arrest him for murder in June, he was killed in a confrontation with police in Seattle.

From the new site, people who sign up for the reward can download a PDF of the timeline of her death and a map of a possible burial site that was handwritten by Jones.

"Losing a child is the worst feeling ever," said Gabe, adding that she had been a fighter her whole life.

"She fought so hard when she was still in her mother’s womb," said her father. "My wife was bedridden for 3 months because she was too small. We almost lost her from pneumonia when she was 5 years old too."

In August, the family met with the Contra Costa County District Attorney about possible involvement of Jones' mother in the murder. However, D.A.'s office could not establish the mother knew her son allegedly killed Gabe, nor could they establish if she helped him after the fact.

The family said Oakley city officials and the police department came together for this new site and volunteer effort.

"The Gabe family, and the Oakley community at large has been deeply impacted by the homicide of Alexis Gabe," said Paul Beard, Chief of Police. "This impact is made even larger due to the fact her body has not been recovered."

"It's not easy raising a child," said Gabe. "That’s why it is so hard to accept that all those years spent taking care of your child is taken away from you in just a blink of an eye. No parent should bury their child."