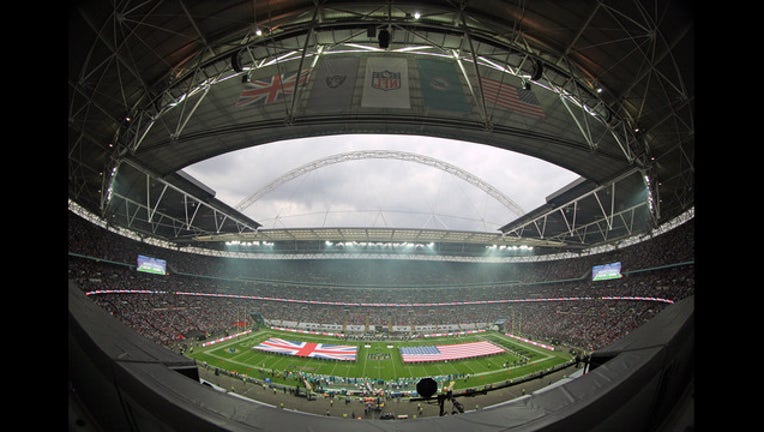 A general view as the national anthems are played prior to kickoff during the NFL match between the Oakland Raiders and the Miami Dolphins at Wembley Stadium on September 28, 2014 in London, England. (Photo by Nicky Hayes/NFL UK - Pool /Getty Images)

OAKLAND, Calif. (KTVU) - The Raiders are returning to the UK for the 2018 season in a week six matchup against the Seahawks at Tottenham Stadium in London.

Tottenham Stadium is the home field for the Tottenham Hotspur and it becomes the third site to host a regular-season NFL game in the UK. The stadium is set to open this summer and will feature a retractable grass field that has an artificial surface underneath used for NFL games.

The Oct. 14 meet marks the Raiders fourth international game in five years. The team played at Estadio Azteca in Mexico City the past two seasons, where they beat the Texans in 2016 and lost to the Patriots in 2017. The last visit to London was at Wembley Stadium – where the other two 2018 games will be played – and the Raiders lost to the Dolphins.

“London is the international home of the NFL and I am really excited to welcome the world's best American football stars and their thousands of fans from around the globe back to our city,” said Mayor of London Sadiq Khan.

Raiders have been selected as the home team – as they have been in all previous international games – which means they’re missing out on another game in Oakland during their final seasons before the move to Las Vegas. By the end of next season, 29 of 32 teams will have participated in the 24 international games played.

Dates for the rest of the Raiders’ schedule have not been finalized, though the team knows who they will face. And as far as additional travel games, they’ll visit the Broncos, Chargers, Chiefs, Ravens, Bengals, Cardinals, 49ers and Dolphins.

The additional two games played in London include the Eagles against the Jaguars and the Titans against the Chargers. Dates are not yet confirmed, but are expected to be during week seven or eight.