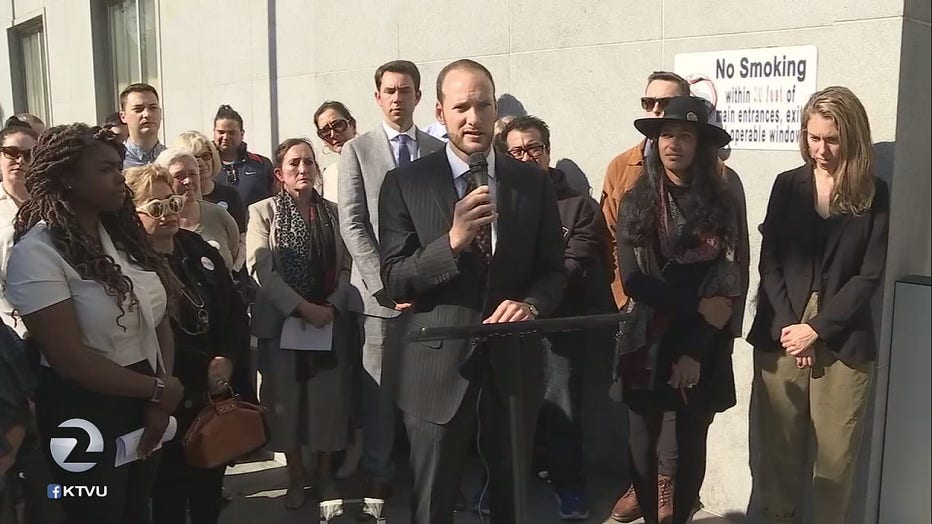 Candidate for San Francisco DA, Chesa Boudin and other candidates call on Mayor Breed to appoint the winner of the election immediately.

The latest numbers from the San Francisco Department of Elections shows Interim District Attorney Suzy Loftus has taken the lead over her political opponent, Chesa Boudin in a hotly-contested race.

The latest numbers came out late Wednesday afternoon, and it's unclear yet if there will be a challenge or a recount.

Boudin had led Loftus throughout the night Tuesday.

But since none of the candidates received a majority, the race went to ranked-choice tabulations. Ranked-choice voting was established to select a winner with the majority of votes, while avoiding costly runoffs.

In contests where no candidate receives a majority of votes, the person with the fewest votes is eliminated, with that person's votes then being distributed to the other candidates.

Dautch was eliminated in the first round, with his votes then going to the other candidates, who were the second choice of Dautch supporters.

The San Francisco District Attorney's race has been hotly contested, and was shrouded in controversy, when Breed appointed candidate Loftus to interim D.A. just weeks before the election. The other candidates called the move "unfair," and said Loftus would feel beholden to Breed. Loftus had replaced George Gascón, who is headed to Los Angeles to run for district attorney in that city.

In the city's race for mayor, Tuesday's early election results show incumbent Mayor London Breed has been re-elected with more than 69% of the vote.

Although Breed won the mayoral election last year following the sudden death of Mayor Ed Lee, she was elected only to serve until the end of Lee's term. When certified as the winner this time, Breed will begin serving her first full term as mayor on Jan. 1, 2020.

Other mayoral candidates include Ellen Lee Zhou, who received more than 16%, and Joel Ventresca, who garnered more than 8%, preliminary results showed.

Similar to the district attorney's race, the District 5 supervisor race also remains too close to call, with candidate Dean Preston ahead by
just 218 votes over Supervisor Vallie Brown after rounds of ranked-choice voting.

Preston has 6,439 votes compared to 6,221 for Brown. Candidates Ryan Lam and Nomvula O'Meara have been eliminated.

Brown was appointed by Breed last year to complete the rest of Breed's term as District 5 supervisor after she became mayor.

The city elections department is expected to release its next update on the various races on 4 p.m. Wednesday after continuing to count
ballots.