REDWOOD CITY, Calif. - A 24-year-old Redwood City man has been arrested, accused of being in possession of items worth more than $14,000 stolen from half a dozen Bay Area Home Depot stores, police said Tuesday. 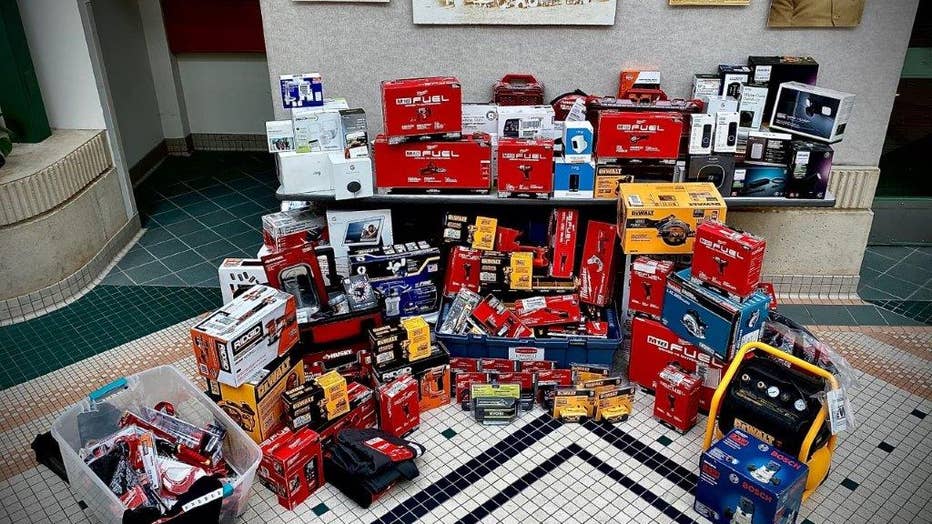 Redwood City police said they found more than $14K worth of stolen goods from Bay Area Home Depot stores at the home of Eric Crossman, who was arrested on Dec. 3, 2021 on charges including commercial burglary, possession of stolen property.  (Redwood City Police )

Detectives launched an investigation last Friday into a possible organized retail theft, after receiving information about "suspicious activity" involving the suspect, Eric Crossman, at his residence located in the 200 block of Grand Street.

Police said a probation search of the home led to the discovery of more than 80 stolen items. "Most of the items recovered were high end power tools and electronics," police said in a news release.

Crossman was arrested and booked into the San Mateo County Jail on charges of commercial burglary, possession of stolen property, resisting arrest, and possession of a controlled substance.

The arrest came amid a rash of organized retail thefts across the Bay Area. Last month in San Francisco, the Louis Vuitton store in Union Square and other high-end retailers in that area were hit by a group of thieves, who smashed windows, looted, and emptied out stores. The next day, another brazen group of some 80 thieves hit the Nordstrom store in Walnut Creek’s Broadway Plaza.

Investigators in Redwood City told KTVU they don't have any evidence at this time to link Crossman to a wider theft ring. Police said Crossman has been on probation since 2018 for first-degree burglary.

Anyone with information about the case was asked to contact Detective Sergeant Nick Perna at 650-780-7672 or the Redwood City Police Department’s tip line at 650-780-7110.