SAN FRANCISCO - Pacific Gas and Electric Company on Tuesday morning shut off power to 172,000 customers in 22 counties throughout California in an effort to prevent more devastating wildfires.

By Tuesday evening, as many as 167,000 remained without power from the wind event that saw 60 mph winds in the North Bay. Officials said full power restoration was expected for all customers by the end of Wednesday.

The utility has set up 50 community resource centers where the public can access hand-washing stations, medical equipment and device charging, as well as bottled water, snacks and air conditioning. However three of those centers were closed due to threats from wildfires. Two of them were in Butte County and one in Yuba County.

"It's kind of tough," said Rachana Pratt, who works at the Corner Park Cafe in Santa Rosa. "It's really difficult." 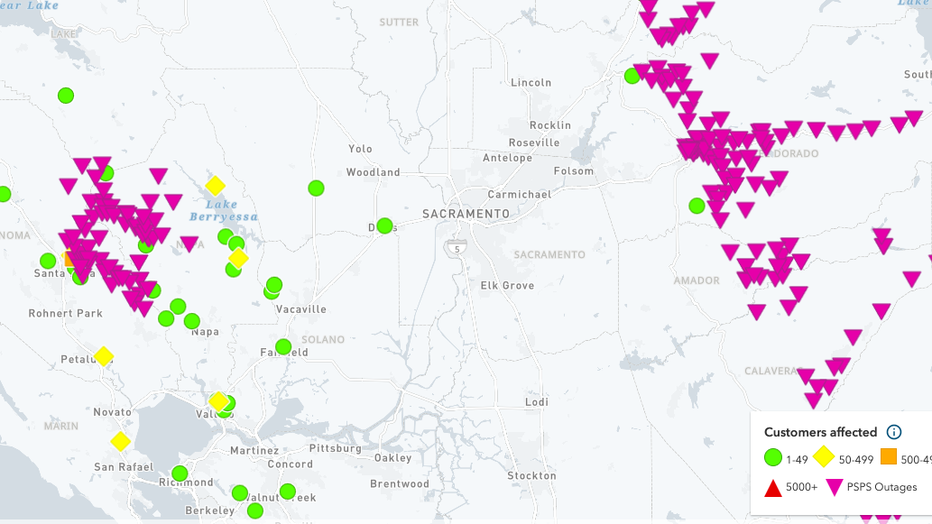 "If we have these critical dry fuels we know are out there and 40 mph winds and an ignition, you know you could get a very fast propagating wildfire," said PG&E Meteorologist Scott Strenfel.

Power was shut off about 9 p.m. Monday to 6 a.m. Tuesday. PG&E said that power will be shut off in Kern County at approximately 7 p.m. Tuesday.

The utility company said it only shuts off power as a "last resort, when it is necessary to do so to protect public safety from extreme wildfire threat."

Santa Rosa resident Paul Lyons said he endured shutoffs last year and he was without power for nine days.

"All the fans and the air conditioner and everything shut off. It was still probably around a 100 degrees in the house," said Lyons.

A spokeswoman for the utility, Deanne Contreras said the company has been working to keep PSPS events smaller, impacting fewer customers.

The utility has been blamed and criminally charged for several of California's wildfires over the last few years. In March, for example, PG&E agreed to plead guilty to 84 counts of involuntary manslaughter in the deadly Camp Fire that roared through Butte County in 2018.

PG&E must also face a $2.1 billion Public Utilities Commission penalty for its role in causing a series of fatal fires in the North Bay in 2017.

PG&E said the current power shutoff was based on forecasts of dry, hot weather with strong winds that pose a significant fire risk. The National Weather Service has placed most of Northern and Southern California, including 1.5 million PG&E customers, under Red Flag Warnings for fire danger.

Forecasts indicate that the peak period of winds should end Wednesday morning. PG&E said there were no further major wind events on the horizon for the remainder off the week.

Pacific Gas and Electric Company on Tuesday said the utility has shut off power to 172,000 customers in 22 counties throughout California in an effort to prevent more devastating wildfires. Sara Zendehnam reports

“Extreme events are becoming almost normalized," he said. "I quite literally have no patience for climate change deniers.”

Once the weather subsides and it is safe to do so, PG&E crews will begin patrolling power lines, repairing damaged equipment and restoring customers, the utility said.

PG&E crews will need to conduct safety inspections of approximately 10,625 miles of transmission and distribution lines, which is equivalent to twice the distance from San Francisco to Tokyo.

Restoration activities can only take place during daylight hours, so it’s likely that some customers may not be restored until 9 p.m. Wednesday.

The company said it anticipates more shut offs are coming.

"Based on historical data, we expect to do several PSPS events this year. That's what we expected at the beginning of the year, said Contreras. "Not all impacting the North Bay, not all at the same time, but but we are expecting to do several this year and we were expecting to do at least one in Sonoma County and one in Napa County and this is, of course the first on this year."