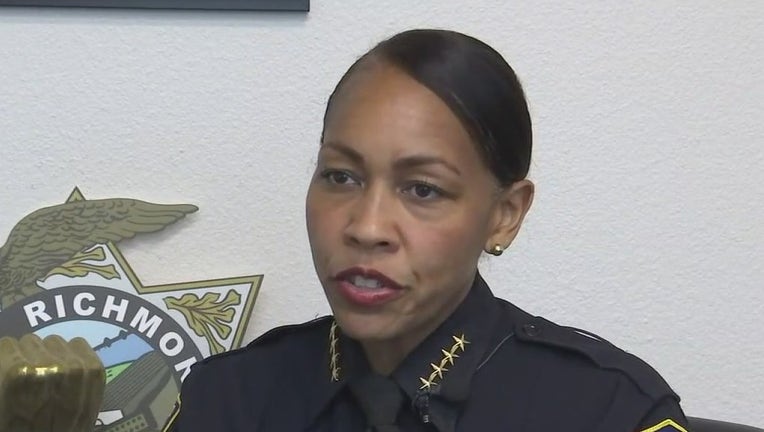 RICHMOND, Calif. - A police chief in the San Francisco Bay Area who was put on administrative leave after a relative accused her and her police sergeant husband of abuse has been reinstated to her job, her attorney said.

Bisa French was reinstated as police chief in the city of Richmond on July 15 following a nine-month leave of absence, her attorney, Mike Rains, told the San Francisco Chronicle.

Rains did not immediately return a phone message from The Associated Press seeking comment Tuesday.

French was placed on administrative leave following several incidents that started last September involving a then 18-year-old relative who accused French and her husband, Oakland Police Sgt. Lee French, of attacking her in Contra Costa County and threatening to kill her and her 34-year-old boyfriend, who the couple said was pimping her.

An altercation between the officers and the man's relatives in neighboring Solana County led to an investigation by the Vallejo Police Department — a probe that resulted in both officers being placed on leave.

Their relative sought a restraining order and the couple agreed in Contra Costa County Superior Court last year to stay away from her for two years, despite saying they believed their relative was being sex-trafficked. Earlier this year, both the Solano and Contra Costa district attorneys’ offices declined to charge Bisa and Lee French with criminal wrongdoing, including allegations that they made threats to people in both counties.

"The Determination not to file (charges) was based on the information those folks provided as well as an assessment of their overall credibility and the credibility of Mr. and Mrs. French," Rains told the newspaper.

MORE: Richmond police chief on leave after daughter accuses her of threats

Rains said that the restraining order is still in place but it was modified to allow both officers to possess firearms in accordance with their law enforcement duties. Rains said he plans to ask for the order to be thrown out.