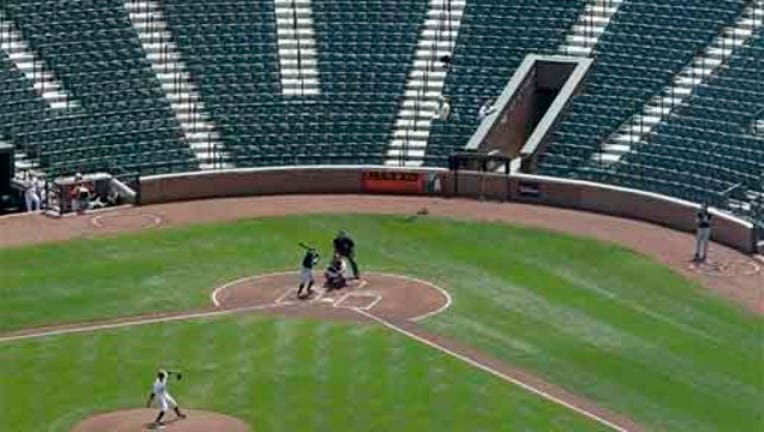 BALTIMORE (AP) — With tempers still smoldering in riot-torn Baltimore and nearby neighborhoods clearing out rubble and debris, the Orioles played a baseball game on Wednesday.

This wasn't for the fans, because there weren't any at Camden Yards.

The game was held behind closed doors, and the Orioles and Chicago White Sox played because it was considered to be the best way to fill out the schedule for both teams.

The timing worked for baseball, not so much for Baltimore. It was an unusual move by Major League Baseball, which usually errs on the side of caution in the wake of tragedy.

Baseball games were cancelled after riots ignited in Los Angeles and terrorists attacked New York and Washington. Baseball put off the World Series in 1989 after an earthquake hit San Francisco.

In Baltimore, after a drug store was set on fire about four miles from the ballpark and the National Guard was summoned to restore order, they played a game because this was the only planned visit by this season by the White Sox. The postponed games on Monday and Tuesday were to be made up as part of a doubleheader on May 28, but there was seemingly nowhere to go on the schedule with Wednesday's game.

"We have a schedule so we've got to get games in," Chicago second baseman Gordon Beckham said. "We can't just miss all three games and expect to make them up down the line. I mean we'll have no off days for the rest of the year. So, we at least have to get this one in."

Just about everyone who put on a uniform understood the circumstances. Though no property around the ballpark was damaged, the city was hurting and here they were, playing a baseball game to preserve the integrity of the schedule.

"It is strange. The commissioner of baseball made a decision," said Gov. Larry Hogan. "I'm glad that we don't have tens of thousands of fans down there. Even though things appear to be calm, having tens of thousands of people in that part of the city, that's where our command center is operating."

On a scale of what was significant to Baltimore on this day, the Orioles' 20th game of the season wasn't exactly at the top of the list.

"It makes you realize how unimportant really in a lot of ways this is compared to some things that are going on," Orioles manager Buck Showalter said. "You try to keep that mind and look at things realistically, where this fits in the scheme of things. You prioritize what's important and we tried to do that."

Their intentions may have been in the right place, but seemingly not much else.

Playing the game without any fans in attendance was both a good and a bad thing. The team didn't divert any police from doing their job around the city, but the people of Baltimore didn't get a chance to turn the page by watching the home team play at Camden Yards.

"Sports brings people together — black, white, or any different," Orioles center fielder Adam Jones said. "For those three hours, you can have beers, nachos and some Boog's (barbecue) and forget about our daily lives.

"But today, we're just going to have to play a Major League Baseball game without fans. I think that's first time in history."

Must the game go on?

"We've thought about that, and we've actually talked about that," Orioles first baseman Chris Davis said. "Obviously the decision was out of our hands. But the thing that makes it so tough is that this is an out-of-division opponent. We would have had to basically make up three games.

"We're doing the right thing. I'm not real happy about playing in an empty stadium. That's one of the reasons that we look forward to coming home so much, playing in front of our fans. But we also understand that there's a bigger picture here."

That's true, but the bigger question is whether they should have been playing at all.

"There are a lot more important issues going on outside the stadium," Orioles left-hander Zach Britton said. "It kind of makes you realize how small baseball is compared to some of the other issues in the U.S. and around the world."