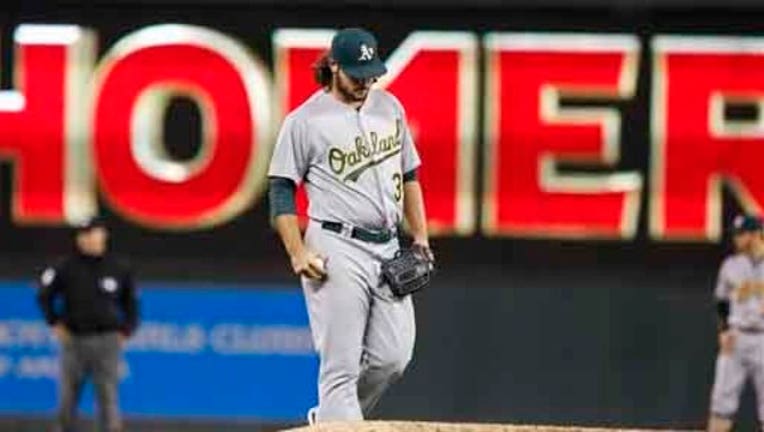 MINNEAPOLIS (AP) — Eddie Rosario homered on the first pitch he saw in his major league career, Eduardo Escobar also homered and had five RBIs and the Minnesota Twins beat the Oakland Athletics 13-0 on Wednesday night.

Rosario's milestone homer traveled about 400 feet into the left-field seats and gave Minnesota a 1-0 lead in the third inning. He's the 29th major leaguer to homer on his first pitch and the 117th to go deep in his first at-bat.

Escobar homered off Scott Kazmir (2-1) in the sixth and hit a two-run double high off the wall in the seventh. Kennys Vargas added a three-run homer in the eighth.

Kyle Gibson (3-2) pitched six innings and hasn't allowed a run in his past 17 innings.

Rosario grinned as he rounded the bases following his home run. After touching home plate, the rookie raced into the dugout where his teammates gave him the silent treatment.

Players on the Twins' bench eventually cracked and engulfed Rosario, who was called up from Triple-A Rochester two days ago, with high-fives and back slaps.

Brett Lawrie had two hits for the A's to extend his hitting streak to 10 games, which is the longest active streak in the American League.