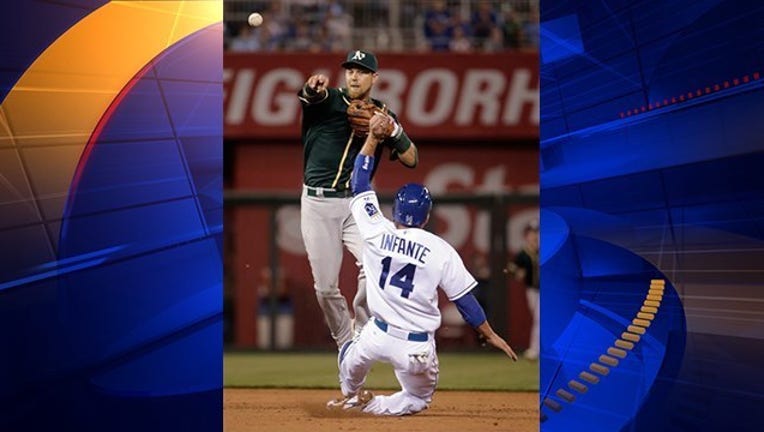 KANSAS CITY, Mo. (AP) — The Royals and A's picked up right where they left off.

In their first meeting since last September's dramatic wild-card game, Paulo Orlando delivered a go-ahead triple in the eighth inning Friday night to help Kansas City to a 6-4 win over Oakland in another back-and-forth affair.

Omar Infante also drove in a pair of runs for the Royals, whose 12-inning victory over the Athletics last year ultimately spurred them all the way to Game 7 of the World Series.

Kelvin Herrera and Wade Davis (2-0) each pitched a scoreless inning in relief of the Royals' Jeremy Guthrie, and Greg Holland breezed through the ninth for his fourth save.

Dan Otero (0-1) gave up both runs in the eighth inning for Oakland.

Stephen Vogt hit a pair of solo homers, and Ike Davis also went deep for the A's, whose team bears little resemblance to the one that lost that playoff game at Kauffman Stadium last year. For one thing, their designated hitter these days is Billy Butler, who was playing for the Royals back then.

Butler went 1 for 4, extending his hitting streak to 10 games to start the season.

The A's jumped in front on Brett Lawrie's sacrifice bunt in the second inning, and Kansas City pulled ahead with five straight two-out singles in the third.

Oakland quickly answered when Davis homered on the first pitch he saw in the fourth, and Vogt tied it at 3 with his first homer just two pitches later.

Kansas City went in front again in the sixth on Infante's single, but Royals manager Ned Yost elected to leave Guthrie in rather than go to Herrera at that point. Vogt made him pay with a drive to right for his first career multihomer game.

Later in the inning, Lawrie was on first base when Josh Reddick lined a pitch off Herrera toward third, where Mike Moustakas fielded it. He flipped to Alcides Escobar covering second, but Lawrie's late slide over the bag caused a collision that left Escobar crumpled on the dirt.

He was helped off the field without putting any weight on his left leg, while Lawrie had to be escorted by his teammates through a horde of angry Royals and back to the Oakland dugout.

The Royals said Escobar is day to day with a sprained knee.