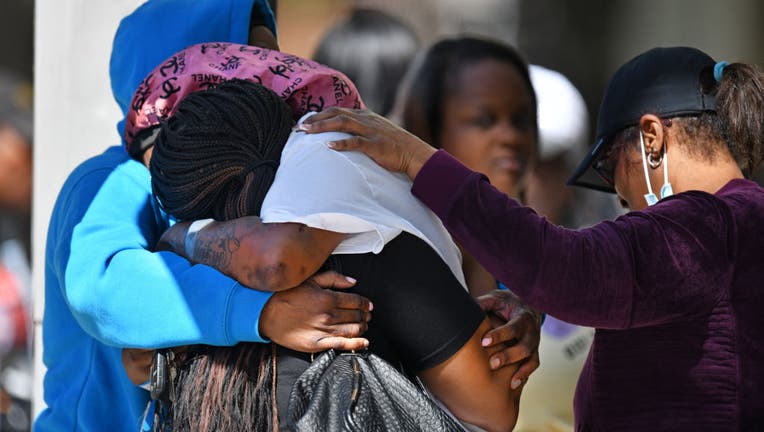 SACRAMENTO, CALIFORNIA - APRIL 3: A group of women console each other at the scene of a mass shooting in Sacramento, Calif., on Sunday, April 3, 2022. The family was grieving for a victim that died in the shooting named Sergio Harris, of Sacramento.

SACRAMENTO, Calif. - Newly filed court documents provide for the first time a detailed account of how a gunfight over an unspecified gang dispute unfolded in downtown Sacramento earlier this month, leaving 6 dead and a dozen wounded.

Three are among the six dead, although it was unclear if all fired weapons. Two of the suspects — brothers Smiley and Dandrae Martin — were wounded and are hospitalized or in jail. A third suspect, Mtula Payton, 27, remains at large.

In a social media clip posted hours before the shooting, the Martin brothers are seen posing with Joshua Hoye-Lucchesi, 32, and two handguns and a rifle. In the video, Hoye-Lucchesi and Smiley Martin, 27, talk about going downtown while armed to loiter outside nightclubs and "boast about shooting rival gang members," according to the 13-page document.

In the video, both Hoye-Lucchesi and Smiley Martin state allegiance to the Garden Blocc Crips.

Later, surveillance footage from downtown Sacramento April 3 at 1:57 a.m. shows a person next to Martin pointing in the direction of Payton and Devazia Turner, 29, according to the document. Authorities say both are members of a rival gang, G-Mobb.

Seconds later, Payton and Turner start approaching the corner where the Martin brothers and Hoye-Lucchesi are standing, court papers said. Payton and Turner are joined by Sergio Harris, identified in documents as a member of ally gang Del Paso Heights Blood.

Deputy District Attorney Brad Ng filed the documents to make sure Smiley Martin, who is hospitalized, is not released on bail once he is booked into Sacramento County Main Jail, the Bee reported. Authorities plan to charge him with being a felon in possession of a handgun and carrying a machine gun that night.

Martin reportedly fired 28 rounds from a Glock 19 handgun and others returned fire until more than 100 shell casings littered the streets, according to the court documents.

Dandre Martin, 26, is in jail on weapons related charges but has not been charged with homicide.