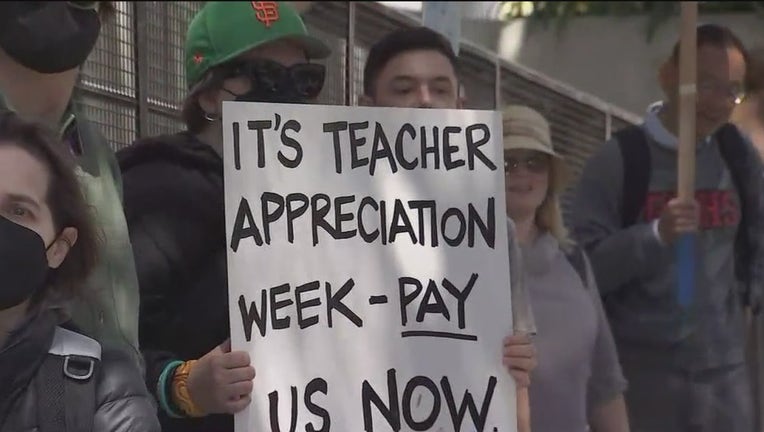 SAN FRANCISCO - More than a month after San Francisco teachers staged a sleep-in at San Francisco Unified School District headquarters demanding changes to a glitchy payroll system, many of those teachers say the issue still has not been resolved.

"Today is a reaction to the fact that they did great work right after the sleep in, right after we were there," said Chris Clauss. "But, we haven't seen movement since."

In mid-March a group of teachers took over part of district headquarters staging a sleep in, outraged over a new payroll system that shorted teachers throughout the district. School district officials said at the time they would work to resolve the issues, but some teachers are still in limbo.

Sarita Lavin is a new teacher and says the technical glitches led to her getting underpaid to the tune of $10,000. "So, that's a pretty large amount of money, a large discrepancy in my pay," said Lavin.

She said trying to resolve the issue has been a bureaucratic roundabout. "The payroll office never organized anything around any of us to explain what our paycheck should look like, how to read them, where there could be discrepancies," said Lavin. "That was all coming from staff here who just worked together and shared information and found out themselves."

The district said in March that the situation was unacceptable. SFUSD said some of the broader issues have been addressed, what's happening now are individual cases that need to be resolved on an individual basis, and that is taking time. But teachers say they don't have the luxury of time. "We want SFUSD to publish an accessible and transparent pathway for educators to rectify future pay issues," said Popalisky. "No more 'file a help ticket.'"

KTVU heard from United Educators of San Francisco who said the teachers at Washington High School aren't the only ones still struggling, they estimate hundreds of other teachers are in the same boat.

The school district again apologized for what it called unforeseen challenges that staff are navigating, and is pledging that every staff member in the district will be paid what they are owed.