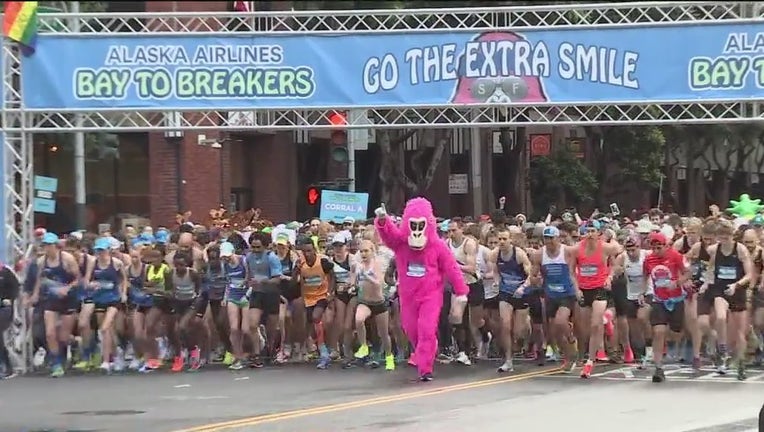 SAN FRANCISCO - One of San Francisco's most eccentric events returned to the city on Sunday.

More than 10,000 runners, some wearing wacky costumes and others wearing nothing at all, took over the streets for Bay to Breakers. The road race hadn't been held since 2019 due to the pandemic.

The race started at Embarcadero at 8 a.m. and wound its way through nine neighborhoods before ending up at the Great Highway along the Pacific Ocean.

Charlie Mercer, CEO of Capstone Event Group, the Southern company that acquired the event three years ago, said he was excited to have runners pounding the pavement once again.

But there were some changes this year.

Mercer reminded attendees that bags weren't allowed at the race for safety reasons, unless they were clear and no bigger than 8.5" x 11." In the past, wheeled floats were quite famously allowed, but wheeled devices were banned. Another big change was no alcohol on the racecourse.

Some probably thought: ‘What’s the point?'

However, Mercer assured there was a beer garden finish party with Fort Point Kolsch and Speakeasy Big Daddy IPA available for purchase.

As far as COVID restrictions were concerned, there were little to no indoor components to the race, so no masking requirements were in place.

"While the numbers will be smaller this year than they were in 2019, the space we're utilizing for the start corral is the same. It will be a more spread out start corral. Once the race starts, people spread out a bit more," Mercer said.

Bibs were mailed out to more than 15,000 people for those who signed up to run prior to May 6.

Mercer said as many as 18,000 are registered to run the race, but that there are often times no-shows who they account for.

The race's origins can be traced to its first incarnation as the Cross City Race held in 1912.

For more information on the race check out the Bay to Breakers website.