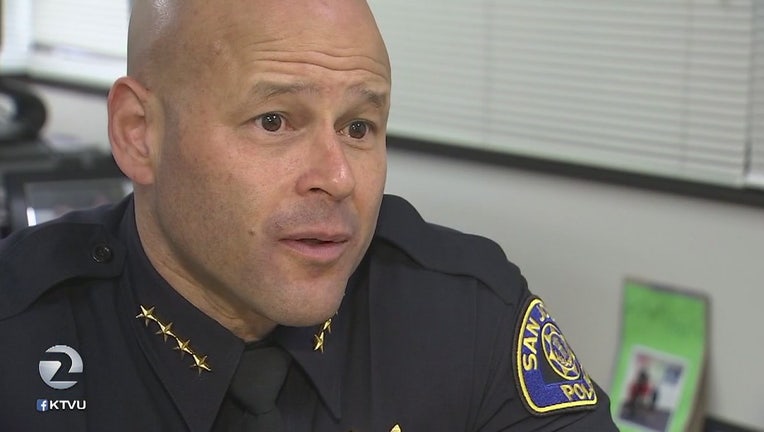 Mayor Sam Liccardo hailed Garcia, 49, as an "exuberant leader who gave his heart and soul to his hometown."

“He brought this police department back from the brink, rebuilding our officers’ ranks, their morale, and most importantly, their faith in themselves and their mission. I wish him all the best as he moves into this next chapter of his life.”

— Liccardo said in a statement on Monday

Garcia joined the force in 1992 where he worked in the patrol division before moving to the narcotics enforcement division.

He was then promoted to sergeant in 2000 and continued to rise through the ranks going on become police Captain then Deputy Chief for the Bureau of Investigation before assuming the role of Assistant Chief of Police in 2013.

San Jose Police Chief Eddie Garcia announced his retirement on Monday after 28 years with the department and the last four as top cop. The mayor says they will search nationwide and within the department for this replacement. He will serve until December.

Garcia took over in March of 2016 after former Chief Larry Esquivel retired.

"I came to SJ as a young boy from Puerto Rico, learned how to speak English here and ultimately became chief of the 10th largest city in the country," Chief Garcia said on Monday. "I will forever be grateful to this City and this Department. And privileged to have had a front row seat to watch the amazing work of the men and women of this department. These nearly 30 years have been a fantastic ride.”

San Jose Police Officers Association President Paul Kelly said in a statement: "Chief Garcia never forgot what it was like to push a patrol car through the streets of San Jose and what a difficult job police officers have in trying to keep our residents and businesses safe. We have been able to work collaboratively to start the process of rebuilding our police department after the debilitating Measure B and we have enjoyed a respectful and productive relationship."

Police departments nationwide have come under scrutiny since the George Floyd protests against police brutality swept both urban and rural areas earlier this summer.

SJPD was not exempt from criticism associated with those recent protests.

However, Garcia defended his department's actions and use of force during the protests, saying officers used non-lethal force and that they were under fire from "agitators". As many as 400 complaints against SJPD behavior stemmed from the Floyd protests.

The chief would later restrict use of rubber bullets by police in crowd control situations.

Also this summer, the department was marred in scandal when four officers were placed on leave when a private Facebook group consisting of current and retired officers, who made racist and bigoted comments, came to light.

Liccardo said Garcia's departure has nothing to do with recent events and that he planned to retire long before due to personal reasons. The mayor said a wide search will be cast within the department and across the nation for his replacement.

Garcia will serve as police chief through the end of 2020.