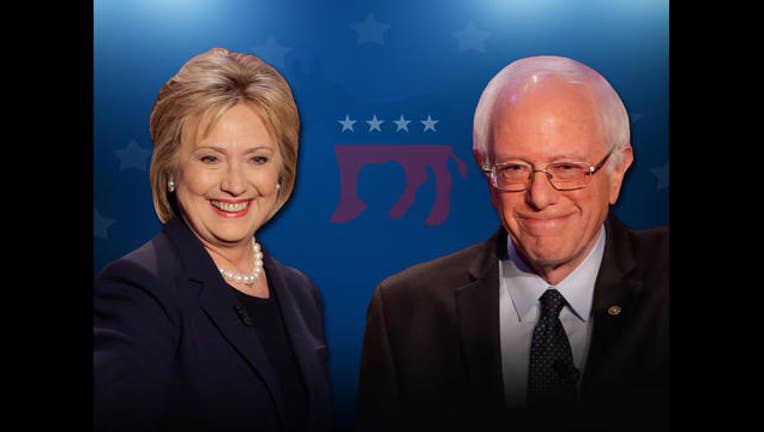 NEW YORK (AP) — Bernie Sanders and Hillary Clinton staged dueling New York City rallies on Wednesday ahead of the state's pivotal presidential primary, with the Vermont senator drawing thousands of supporters in a show of force for his self-proclaimed political revolution.

Sanders' campaign said his rally in Manhattan's Washington Square Park brought out 27,000 people, one of the largest gatherings in support of the 74-year-old democratic socialist who has galvanized Democrats and independents alike with his calls for reforms to corporate America and remedies for income inequality.

"When I look at an unbelievable crowd like this I believe we're going to win here in New York," Sanders declared in front of the iconic Washington Square Arch in the city's Greenwich Village neighborhood.

Clinton attracted a smaller but still enthusiastic crowd of 1,300 people at a Bronx community center, where she made no mention of Sanders but focused instead on Republican rivals Donald Trump and Ted Cruz.

Sanders didn't return the favor, mentioning Clinton by name throughout his speech. He noted that she had the support of super PACs and had voted in favor of the Iraq War, drawing boos from the crowd.

Foreshadowing a likely issue in Thursday night's debate, Sanders urged Clinton to back an expansion of Social Security benefits, a major cause among liberals.

"I am still waiting for her response," Sanders said.

The rallies set the stage for a high-stakes Brooklyn debate Thursday night and capped a day in which both candidates courted organized labor. Sanders picked up support from the local transit workers union and walked a picket line with striking Verizon workers— a small army of backers who could pass out leaflets in subways in the days ahead.

Clinton also walked a picket line in solidarity with the Verizon workers and addressed the National Action Network, led by the Rev. Al Sharpton, giving her a visible platform for the city's black community. There she stressed her differences with Sanders on gun laws, calling gun violence a "national emergency."

New York City offers by far the largest bloc of votes in next Tuesday's primary, and campaign officials estimate it could account for about 70 percent of the state vote. In 2008, when Clinton dueled with then-Illinois Sen. Barack Obama in the state's primary, more than half of the vote came from the city's five boroughs.

Polls have shown Clinton with a lead against Sanders, putting pressure on Sanders to overcome the former secretary of state's edge. Clinton holds a lead of about 250 pledged delegates in the chase for the nomination, an advantage Sanders is trying to chip away in upcoming primaries in New York, Pennsylvania, Maryland and beyond.

Sanders sought to lower expectations at the end of his rally, saying "this is a tough race for us" given Clinton's tenure representing New York in the Senate. He also noted that the primary does not allow independents to participate or feature same-day registration. But he added defiantly, "I think we've got a surprise for the establishment."

As Clinton dug into campaigning in her adopted home state, Sanders prepared to fly to Rome for a 10-minute speaking slot Friday at a Vatican conference on social and economic trends. He's expected to head overseas just after the pair debate Thursday night.

His comments in Rome would dovetail with his campaign push for economic equality and come ahead of critical primaries in states with large Roman Catholic populations: New York on Tuesday and Rhode Island and Connecticut a week later.

"What I'm planning to say is that it is not acceptable from a moral perspective, from an economic perspective or from an environmental perspective, that so few have so much and that greed is running as rampant as it is throughout the entire planet," Sanders said in a phone interview with The Associated Press.

Clinton was heading to California on a fundraising swing with weekend events planned with actor George Clooney.

While Clinton has captured the endorsements of most Senate Democrats, Sanders claimed progress in nabbing his first endorsement from a Senate colleague, Oregon's Jeff Merkley.

In an op-ed piece in The New York Times, Merkley cited Sanders' positions on the dangers of global warming, and the "threats to our economy from high-risk strategies at our biggest banks." He said Sanders has fought hard for military veterans, and he conceded he has an uphill battle ahead to win the Democratic nomination.