A Pop Warner football team in Santa Clara is headed to Orlando Friday to play for the National Championship. They’re one of eight teams from around the country to make the playoffs.

SANTA CLARA, Calif. - A Pop Warner football team in Santa Clara is headed to Orlando Friday to play for the National Championship. They’re one of eight teams from around the country to make the playoffs.

This is the first time the league is offering a national championship game for 11-year-olds. What’s special about this team is that a third of them are playing football for the first time this season.

With a winning record of 9 and 2, the Santa Clara Wildcats 11U team are going to Orlando to try and bring home the national championship trophy.

"I’m looking forward to the experience. Not only just going to Florida and having that cool time with the teammates but playing in a championship game. It’s something I’ve never experienced so it’s pretty cool," said Gavino Rodriguez, the Wildcats starting Quarterback.

The Wildcats gathered at Seniore’s Pizza Tuesday for a going-away party and final fundraiser that included raffling off a big-screen TV. Head coach Roger Young says the trip will cost about $60,000, and they’ve raised about half of it so far. 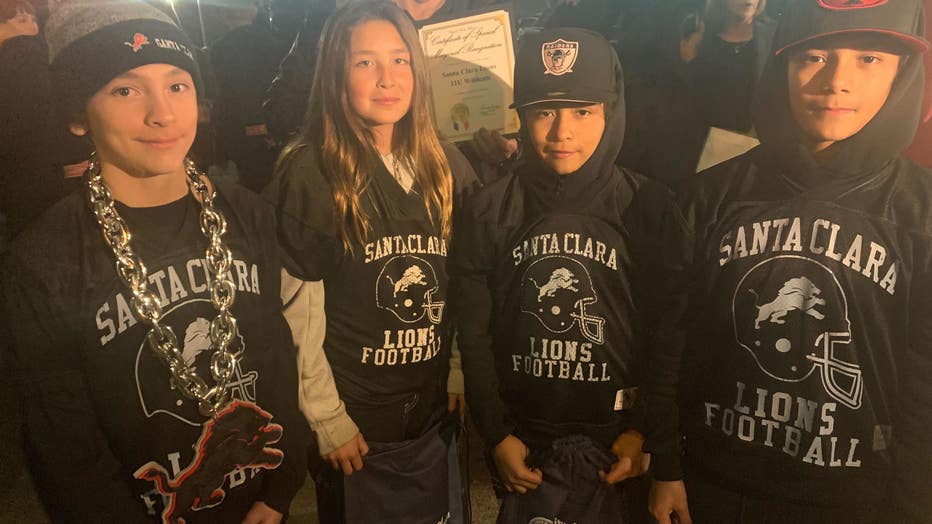 "These are kids with dreams. These are kids that have earned something and from the first second we started this season, you don’t get anywhere unless you earn it," said Roger Young, Santa Clara Wildcats Head Coach.

The Wildcats earned their spot in the playoffs after winning the Pacific Northwest Region championship game in triple over-time. There are 108 Pop Warner teams throughout the country and the Wildcats have one of the few girls to play football on their team.

"I think I've played about five years, but that was flag. But now this is my first year playing tackle," said Ava Imahara, a Santa Clara Wildcats Receiver.

Young says he’s been coaching Santa Clara little league football since 2003 and he says this year’s team is really motivated to win.

"We have I believe eight who had never put on a pad, a practice jersey or even touched a football. So this was the first and beginning for them," Young said.

The team will be in Orlando for a week, and they must win two games to make it to the Pop Warner Super Bowl. If you’d like to donate to this team, just go to KTVU dot com and click the link for this story.