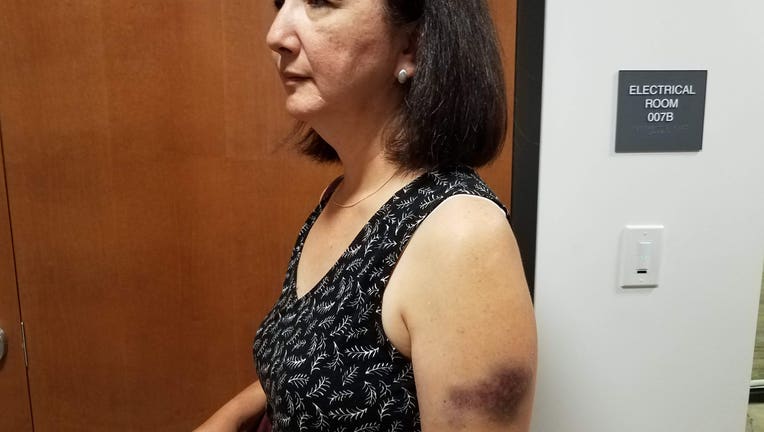 OAKLAND, Calif. - Parents and teachers who were arrested and injured by police during a protest at the Oakland Unified School District Board of Education meeting on Wednesday pushed back against the police narrative that the force used by officers was necessary.

Video quickly emerged after the meeting showing police pushing and striking protesters with batons. Six people were arrested. During a news conference on Thursday, school district police Chief Jeff Godown defended the use of force by officers.

But the protesters, who are mainly parents of students at Kaiser Elementary School, which the school board voted to close last month, say that police were the aggressors and attacked them unprovoked.

A 9-year-old student at Kaiser said that police pushed her backwards onto a chair, leaving her bruised. Video shows a first-grade teacher in the district was struck by a baton by officers, resulting in a large bruise on her arm.

Kaiser parent Saru Jayaraman was left using crutches after she said police pushed her to the floor, smashing her knee. She said doctors diagnosed her with a torn ACL and MCL and that she will be using crutches for weeks and will be recovering for months.

On Thursday, Godown denied that police used force when arresting Jayaraman, and said that he had still not determined how she was injured. Jayaraman said she plans to sue along with other arrested and injured protesters.

Her attorney, Oakland civil rights attorney Dan Siegel, said that they would sue the district for assault and civil rights violations. Siegel said the actions of the district showed "a complete failure to protect the rights of students and parents in the district" and an "unbelievable lack of care for our kids."

The protest was the latest in a series of protests against school closures and the proliferation of charter schools in the district.

Facing declining enrollment and fiscal shortfalls, the district identified 24 schools for potential closure. The board voted to close Roots International Academy in January and Kaiser in September.

But parents at Kaiser did not feel engaged in the process and questioned why their school was being forced to close. They say the protests they have staged protests at each of the three board meetings since the September vote are the only way to be heard.

They are asking for the district to place a moratorium on school closures until after the 2020 election, when restrictions on property taxes for corporations may be repealed. They are also questioning an investment of millions of dollars by the county in a new juvenile detention center when schools are struggling, and are calling for stricter fiscal oversight of the district.

During previous protests, the school board left the room when parents approached the stage and conducted their meeting from another room with public comment delivered via livestream. On Wednesday, anticipating more protests, police erected a metal barricade and brought in more officers and civilian security guards.

Protesters say police attacked them as they approached the barricade. At least one protester jumped over it and was swiftly arrested. At some point, the barricade came down and police officers pushed and jabbed at the protesters nearby.

Amy Haruyama, a first-grade teacher in the district, said that she was standing near the barricade but did not approach it when a police officer hit her with a baton.

She fell backwards and on Friday she said she was still sore in her head, neck and back and had to see a doctor. She had a large visible bruise on her arm from the baton strike.

"It's really just appalling," she said of the police action and response from the department.

Jayaraman, the only protester taken to the hospital, said that officers twisted her arm behind her back and used a pain control hold on her shoulder to take her to the ground. Her shoulder was left swollen as well as her knee, which will require surgery, she said.

She said the police officers mocked her at the hospital before doctors told them to leave the room.

All of the protesters were cited and released for disrupting a public meeting and disorderly conduct. Police said on Thursday that two officers were injured during the protest and possibly two security guards, but so far are not seeking any charges of assault or battery on an officer.

The district attorney's office has made no charging decision in their cases. They have a court date on Nov. 22.

WATCH video of part of the altercation on YouTube: