LIVERMORE, Calif. - The SCU Lightning Complex Fire, made up of nearly two dozen fires across Santa Clara, Alameda and Contra Costa counties, continued to spread overnight and by Friday evening, the blaze had consumed nearly 229,968 acres, making it the largest fire burning in terms of geographical size being battled in California right now. The SCU fire is the 7th largest fire in state history.

According to Cal Fire, 10% of the wildfire was contained. The fire also reached into San Joaquin and Stanislaus counties.

Fire offcials said so far, about 7,000 people have had to evacuate their homes.

The North Side of the SCU fires near Livermore and Sunol have been put at ease, as the fire heads south.

Part of the neighborhood is under mandatory evacuation, yet some homeowners are still reluctant to leave.

“Most of the people are still there. They don’t truly understand why the evacuation orders went all the way down into the valley as far as they did,” said Alan Hennigar.

A Cal Fire worker was in the area urging complacent residents to get out, saying favorable afternoon winds can suddenly shift. 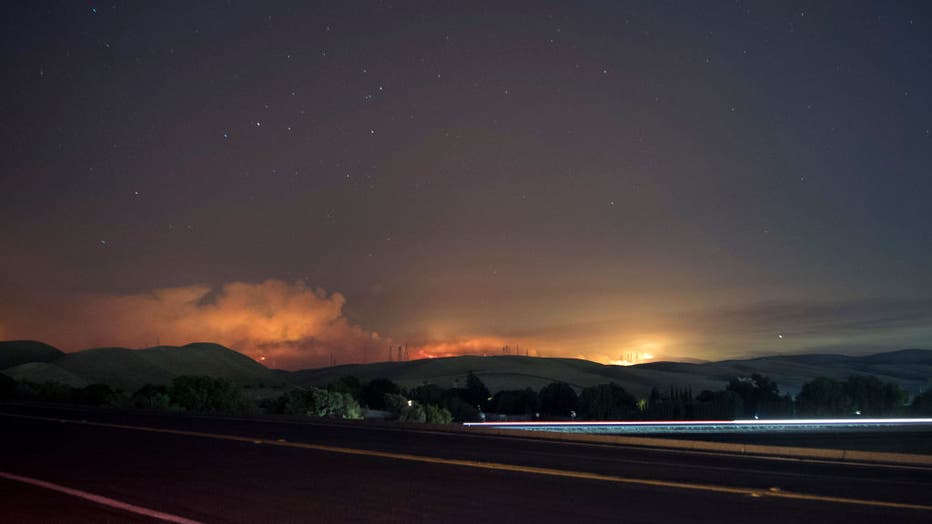 TRACY, CA - AUGUST 18: Part of the SCU Lightning Complex Incident wildland fire burns in the hills near Corral Hollow Road seen from Tracy, Calif., on Tuesday, Aug. 18, 2020. The blaze is part of the 35,000 acres burning across Santa Clara, Alameda,

The SCU fire and the LNU fires in the North Bay have been jockeying for which was is bigger. On Thursday, LNU was in the No. 1 spot. But on Friday, that fire had scorched 219,000 acres, about 10,000 fewer acres than SCU.

The good news is that only five structures had been damaged and no one has died, though nearly 20,000 structures remained threatened and were in harm's way, Cal Fire said.

Interactive map: See where all the fires are raging in California

A Livermore family on Mines Road was clearing brush and doing everything they could to save their home.

"We're taking down low trees, pulling branches from the ground," Bob Stear said. "We’re clearing up all the combustible materials under trees."

His wife, Julie Stear, said: "We've had our things packed since we got the evacuation notice. Now, it's just clearing further anything we possibly can, so if it does come, we can at least save the house."

Since the lightning siege started on Saturday, there have been nearly 12,000 lightning strikes, sparking more than 560 new wildfires.

Those fires have burned over 771,00 acres in total.

Berlant said fire danger remains elevated this weekend as there still may be more lightning expected Sunday through Tuesday, gusty winds in the Eastern Sierra and very hot temperatures.

TRACY, CA - AUGUST 18: Part of the SCU Lightning Complex Incident wildland fire burns in the hills near Corral Hollow Road seen from Tracy, Calif., on Tuesday, Aug. 18, 2020. The blaze is part of the 35,000 acres burning across Santa Clara, Alameda,

West of I-5 North of Stanislaus/Merced County Line

West of the Fire Perimeter

East of Ferguson Rd. East and North of Hwy 152

East to the Stanislaus County line

East of Shingle Valley Rd. and everything East of Anderson Lake, East of Coyote Creek,

All of Mines Road, south of Mile Marker 10 to the county line

West of I-580 to Alameda County line

The PAR Estates and following streets are excluded from the order, but will be in an evacuation warning: (See warning below)

All of PAR Estates which are the following streets:

North of West Corral Hollow Road to I-580

East of the Alameda County line to I-580

East of Lovers Lane and the Santa Clara County

South of Hwy 152 to the San Benito County line

West to the Merced County Line

For the unincorporated areas of Santa Clara County, Morgan Hill, and Gilroy